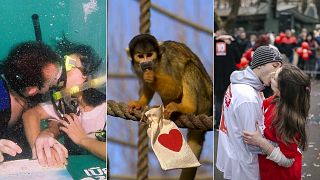 Every year on 14 February, people from all over the world celebrate Valentine’s Day.

Originating from the Christian church’s celebration of Saint Valentine, the celebration is a time for romance, love, and examining the accuracy of cupid's bow and arrow.

Traditionally, some couples buy roses, chocolates, a card or even enjoy a romantic candle-lit meal together.

Others express their desire in much wackier ways, from radical proposal methods to full-blown kissing contests.

Here are some of the unusual ways people commemorate Valentine's Day across the globe.

In Serbia, a longest-kissing contest takes place every year to mark Valentine's Day.

In 2020, 13 couples locked lips in the ‘Kiss Me’ competition, which takes place on the Bridge of Love in Vrnjacka Banja, a small town in the south of Serbia.

The 'Kiss Me' competition is part of a town-wide festival which celebrates all things romance, music and food.

Though social media has shone the spotlight on famous lock bridges in Paris and Amsterdam, locals claim that their Bridge of Love is the oldest love-lock bridge in the world, dating back to the First World War.

The winners of the 2020 kissing competition, Irena and Djordje Boric set a new record of 112 minutes.

It likely came as no surprise to their competitors – the pair have won the competition five times in a row.

2. There's plenty of fish in the sea in Thailand's underwater weddings

Partaking in this next Valentine's Day ritual requires a trip to Thailand – and don't forget your snorkel.

Since the beginning of 1996, the province of Trang, in Thailand grew world recognition for its famous ‘Underwater Weddings’ event, which coincides with the most romantic day of the year.

In 2000 the Trang Underwater Wedding gained official recognition from the Guinness Book of Records as the largest underwater wedding in the world.

Only qualified divers are permitted to take part in the underwater wedding ceremony and some divers will wear their wedding dress or suit in addition to their scuba gear.

Once the ceremony is complete, the scuba officer hands the happy couple their waterproof marriage certificate.

3. Tank you very much

One Russian soldier pulled out all the stops in 2020 to propose to his girlfriend with a high-octane stunt on Valentine's Day.

With his fellow officers, 16 T-72B3 tanks rolled into position to form a heart shape.

Lieutenant Denis Kazantsev led his unsuspecting girlfriend into the centre of the tanks, where he then proposed and handed her red flowers.

On Llanddwyn Island off the coast of Wales, if you want to woo someone, you don't give your sweetheart chocolates, flowers or jewellery; you give them a 'lovespoon'.

According to Welsh folklore, these ornately carved spoons were traditionally made by young men as a token of love for their partners, a tradition dating back to the 17th century.

Today, lovespoons are given as gifts for weddings, engagements, anniversaries, and commonly on Valentine's Day.

In Wales, they have their very own version Valentine's day called St Dwynwen’s Day which is celebrated on 25 January.

The romantic day is named after Saint Dwynwen, the Welsh patron saint of lovers.

While the craft of lovespoon making has decreased over the years, David and Kerry Thomas are determined to keep the tradition alive at their family-run Lovespoon Workshop in Pembrokeshire, Wales.

Kerry Thomas carved his first-ever lovespoon in 1969, which he gave to his wife as a gift when he proposed to her.

Since then the family have made a new spoon each year to add to their personal collection.

The Lovespoon Workshop also sell and craft custom lovespoons for people looking to woo their partners.

"Spoons are used for mixing and blending, bringing ingredients together – so you've got the idea that you're bringing the two people together," explains David.

One of the biggest ways to celebrate Valentine's Day in Denmark is the exchange of a secret lovers card, otherwise known as a ‘gaekkebrev’, which translates loosely to ‘joke letter’.

These cards often contain a funny love poem and are written on a specially cut piece of paper.

Each card's cuttings are made using a method you might have done in school to make snowflakes.

To maintain some level of allure, the writer of the poem does not sign the ‘gaekkebrev’ using their name, but instead uses dots, one for each letter in it.

According to tradition, if the receiver of the card correctly guesses who sent the joke letter, they get an Easter egg on Easter Sunday.

If the receiver fails to guess who sent it, they owe the sender an egg.

6. Some love can be... animalistic

Valentines Day isn’t just a special time for humans, but also for zoo animals all around the world.

On 14 February, many zoos around the world treat their animals to romantic themed snacks – such as London Zoo, who last year fed their loveable squirrel monkeys hessian hanging heart bags filled with mealworms.

Similarly, animals at the Brookfield Zoo – in suburban Chicago, Illinois – were treated to special heart-shaped snacks ahead of Valentine’s Day.

However, one Canadian Zoo set out to mend broken hearts on Valentine's Day, by allowing people to name bugs after their exes before they were fed to the zoo’s insect-eating animals.

The fundraiser, called Bugs or Bouquets, also offered bouquets of vegetables and leafy greens to be donated to other animals, such as hippos, for a minimum contribution of $50 (€43).

Check out the video above to learn more about the bizarre ways the world celebrates Valentine's Day.

Meet the woman making a Bayeux Tapestry replica on her own