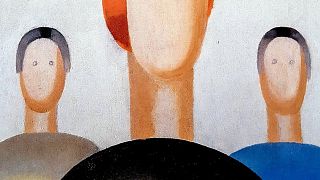 A painting insured for €1 million has been vandalised by a "bored" security guard who drew eyes on the canvas on his first day of work.

Employees at Russia's Yeltsin Center have sent Anna Leporskaya’s 'Three Figures', painted between 1932-1934, off for restoration after the art was vandalised with a museum-branded ballpoint pen.

Authorities confirmed on 8 February that the work had been defaced by a new security employee aged 60.

The unnamed employee since been dismissed from his position, reports The Art Newspaper Russia, who broke the story.

“His motives are still unknown but the administration believes it was some kind of a lapse in sanity,” the exhibition's curator Anna Reshetkina said.

How was the damaged painting discovered?

Leporskaya's artwork depicting three faceless figures was on loan from the State Tretyakov Gallery in Moscow so it could feature at the Yeltsin Center's abstract exhibition, titled 'The World as Non-Objectivity. The Birth of a New Art'.

Two visitors spotted the addition of eyes on two of the figures during a visit on 7 December 2021.

Criminal proceedings against the employee were initially dismissed due to the assessment that the painting could be saved.

Mounting public pressure has lead to this being reconsidered under the charge of vandalism, which carries a sentence of a €468 fine and a one-year correctional labour in Russia.

The piece was sent to a restoration team at the State Tretyakov the day after the incident and is now being treated.

Restoration is expected to cost around €3,000 but experts are confident the painting can be saved without any serious damage to the original brush strokes.

Ink from the ballpoint pen is said to have only slightly penetrated the paint layer.

The Yeltsin Center confirmed they have installed protective screens over the rest of the exhibition to prevent copycats.