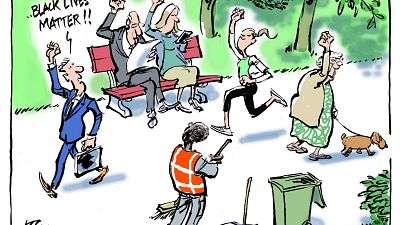 Tom Janssen from the Netherlands scooped the top prize with his "Black Lives Matter" cartoon.

Here's what the jury had to say about the piece:

"Many have been, and still are, those who support, at least ostensibly, the anti-racist Black Lives Matter movement, but without doing much more than raising their fist to improve things on the issue. With his biting irony, precise and dynamic graphics, Tom Janssen unambiguously highlights the hypocrisy of our modern Western societies, quick to get emotional on social networks but indifferent to the concrete reality they face every day."

160 press cartoonists from 55 countries were invited to take part and entered 218 satirical cartoons. The material was examined by an international jury and chaired by Thierry Vissol, director of the Librexpression Centre.

The 56 semi-finalist cartoons selected by the jury will be displayed from 20 September to 31 December in an exhibition in the cloister of the Monastery San Benedetto in Conversano (Italy) and published in a paper catalogue.

The ten finalist cartoons, presented below, will also become postcards available to the public.

The LIBEX2021 competition was organised with the collaboration of Cartooning for Peace and voxeurop.eu

The ten finalists, in alphabetical order, were as follows: