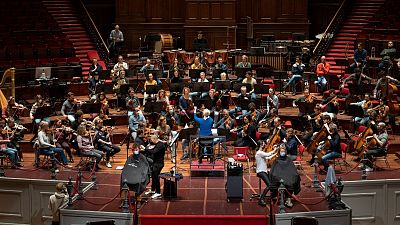 Following violent protests last year this is the latest iteration of angst towards the government in the Netherlands due to their pandemic response   -   Copyright  AP Photo/Peter Dejong
By Tim Gallagher  with AP  •  Updated: 20/01/2022

Dutch art galleries and concert halls have turned themselves into hairdressers and beauty salons in protest against the government pandemic response.

The Netherlands, which has been in a tough lockdown since mid-December, has seen an easing of restrictions for businesses like hairdressers, gyms and nonessential stores while museums, theatres and cinemas remain closed.

In response Amsterdam's Royal Concertgebouw orchestra played second fiddle to a pair of hairdressers and Vincent van Gogh's self-portraits were briefly upstaged by a nail salon as the cultural sector staged a protest at the policy on Wednesday.

The protest is not the first of its kind as the tough Dutch lockdown breeds increasing anger from businesses hit by the restrictions.

Last week and over the weekend hundreds of Dutch bars and restaurants – who are also still under forced closure by the government – opened their doors as a protest against the lockdown they say is crippling their businesses.

On Wednesday it was the turn of the cultural sector, who made their facetious transformations to press home their demand to reopen.

"We do not understand and there is no reasoning for it because we have shown over the last two years that it's very, very safe to go to a concert or to go to a museum," says Simon Reinink, director of Amsterdam's Concertgebouw concert hall.

"Actually, it's our profession — crowd management. We know how to deal with large crowds. And we've done it in a very, very safe way," Reinink added.

It's definitely a first for us at the Van Gogh Museum

The resident orchestra, conducted by Susanna Mälkki, played American composer Charles Ives' Symphony Number 2, while two hairdressers cut hair in the historic venue. Across the street at the Van Gogh Museum, a barber cut the hair of 10 visitors and 10 more people got a nail treatment.

"It's definitely a first for us at the Van Gogh Museum," says the museum's director, Emilie Gordenker.

"I understand that the government has opened gyms but ... you need a mental gym, too, and a museum is a place where people are increasingly coming to find a little depth or reason for their life."

"And the theme of mental health is particularly relevant to our museum, obviously, because of Vincent van Gogh's own mental situation."

The Dutch government has said it will look at possible further easing January 25; while omicron has sent infection rates soaring to levels never earlier seen during the pandemic, hospital admissions continue to decline.

Culture Minister Gunay Uslu said in a tweet: "I understand the cry for help and that artists want to show all the beautiful things they have to offer us. But the opening of society must go step by step. Culture is high on the agenda."