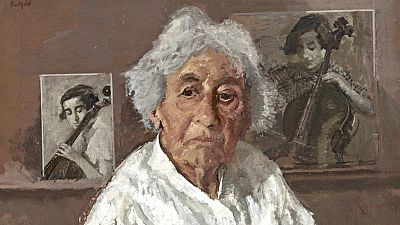 The portraits of the survivors, who all spent time in concentration camps, are being displayed in The Queen’s Gallery   -   Copyright  Royal Collection Trust / © Her Majesty Queen Elizabeth II
By Theo Farrant  & AP  •  Updated: 28/01/2022

For Holocaust Memorial Day, Britain's Prince Charles and the Duchess of Cornwall attended an exhibition showcasing artwork of some of the UK's remaining Holocaust survivors.

His Royal Highness The Prince of Wales had commissioned the paintings, which feature seven men and women who survived the horror of the Nazi campaign to systematically round up and kill all Jews in Europe.

The artworks were unveiled on January 27 at the Queen's Gallery in London, where the pair met the people behind the pictures as well as the artists.

'A living memorial' to those that didn't survive

The survivors shared stories with the Royals about their experiences, with one, 98-year-old Lily Ebert, even showing the future king her concentration camp tattoo.

The portraits will become part of the Royal Collection, standing as a powerful testament to the extraordinary resilience and courage of those who survived, and a living memorial of the six million victims of the one of history's darkest periods.

"Seven portraits. Seven faces. Each a survivor of the horrors of those years, who sought refuge and a home in Britain after the war, becoming an integral part of the fabric of our nation," wrote the Prince, a patron of the Holocaust Memorial Day Trust, in a foreword for the display.

"However, these portraits represent something far greater than seven remarkable individuals. They stand as a living memorial to the six million innocent men, women, and children whose stories will never be told, whose portraits will never be painted."

Which artists were involved with the project?

The sitters and artists featured in the display are as follows:

Admission to the display is included with a ticket to the current exhibition at The Queen’s Gallery, Masterpieces from Buckingham Palace, until 13 February 2022.

The portraits will then go on display for visitors to the Palace of Holyroodhouse in Edinburgh between 17 March and 6 June 2022.

Check out the video above to see the commemorative artworks in further detail.