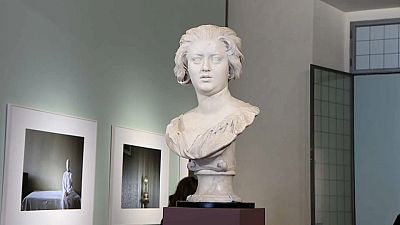 To celebrate the International Day for the Elimination of Violence against Women, Italy's Uffizi Galleries decided to narrate the story of abused women through sculptures and pictures, and in particular through Gian Lorenzo Bernini's marble bust of Costanza Buonarelli.

The marble bust is considered one of the artist's most accomplished portrait sculptures.

What the immaculate stone surface does not reveal, however, is the violence inflicted on Buonarelli when Bernini had her face slashed out of jealousy, just a few months after finishing the bust.

"Making people aware of something they would just see as crime news conveyed in papers, radio or TV. Here you can see the extreme beauty and energy of women, but also the attack on the lives and identities of women," Eike D. Schmidt, director of the museum, told Euronews.

A knife in the 17th-century, now acid – the target is still the same: women's face, identity, and freedom.

"Costanza was disfigured by the artist because of unrequited love; actually, he had one of his servants to do it. Almost four centuries have passed since and only a few details have changed, but the essence is still the same: men regard women and their bodies as their own property," Schmidt went on.

'Bust of Costanza Buonarelli (1636-7)' is the centerpiece of the new and perhaps unexpected exhibition at the world-famous gallery in Florence.

Best known for its unrivaled collection of Italian Renaissance masterpieces, the museum has chosen to pair Bernini's bust with a group of contemporary photographs by Ilaria Sagaria, titled 'Pain is not a privilege (2018)'.

The series of images depict female victims of acid attacks in the aftermath of the terrible assaults, their faces bandaged and blindfolded.

"This episode is described as 'the great love of Bernini', but we have to unmask this narrative, according to which great love leads to violence. We are still there because patriarchal culture is still deeply rooted," added the president of Artemisia anti-violence centre, Elena Baragli.

Around 103 anti-violence centres exist across Italy which help more than 20,000 women a year escape domestic violence and abuse, by providing protection and shelter and offering a path towards autonomy and freedom.

But before going through all of this process, women have to be encouraged to report the abuse they are suffering.

"It is difficult to talk about it, it is difficult even to mention it when you live within violent, chronic dynamics. It is difficult to recognise violent acts. You start thinking that being controlled is natural," revealed Petra Filistrucchi, vice-president of Artemisia anti-violence centre.

Culture also plays a fundamental part in the fight for the elimination of violence against women, because an oppressive and sexist environment still holds sway over women's life and freedom, even four centuries after the beauty of Costanza was ruined by the violence of a man.

Art can evoke the past, but also give us the means to change the future.

Titled 'Lo sfregio' ("The scar") the exhibition opened in advance for the International Day for the Elimination of Violence Against Women, observed on November 25. It will be on view through December 19.