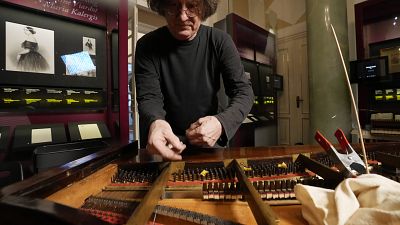 The last piano played by composer Frédéric Chopin is currently undergoing restoration works to bring it back to its best.

Paul McNulty, an American expert on historical pianos, has been tasked with the challenge at the the Frédéric Chopin Institute in Warsaw, Poland.

Aleksander Laskowski, spokesperson for the Institute, describes the piano "as a very precious instrument," manufactured in Paris and by Chopin's friend and virtuoso, Camille Pleyel.

The Pleyel piano – dating back to 1848 – ended up in Warsaw after the composer's death, where it was sold to pupil and friend Jane Stirling.

She later passed it on to Chopin's sister Ludwika, who sold it on to the National Museum of Warsaw in 1924.

Why does the piano need restoring?

"A piano ages as any musical instrument, as opposed to violin which gets better with age, with pianos the wood just loses its flexibility and you need to renovate the instrument," explains Laskowski.

However, the piano had an earlier restoration in the 1950s which was its biggest problem.

"This piano was renovated in the 1950s and a wrong type of strings was put onto it" he continues.

"Modern strings were put on and it destroyed the tone," says McNulty, who describes it as living as a "very important corpse" – until now.

How will the piano be restored?

McNulty is tasked with filling in cracks in the piano's soundboard and fitting the correct wire strings, similar to those it would originally have had.

He will spend several days restoring the piano, which he is certain will bring the instrument back to its former glory.

Once he's finished, the Frédéric Chopin Institute does not intend for it to sit silent.

"We hope it will sing for us again. So an opportunity to hear the sound of Chopin's piano as he heard it when he composed is quite likely," says Laskowski.

Check out the video above to learn more about the piano's restoration.