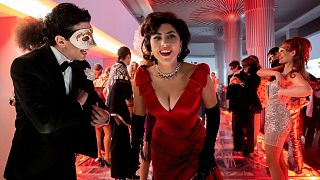 The Ridley Scott film "House of Gucci" has been criticised by the remaining members of the Gucci family   -   Copyright  Fabio Lovino/AP
By Tim Gallagher  •  Updated: 01/12/2021

Ridley Scott’s hotly-anticipated biopic “House of Gucci” has premiered this week to mixed reviews, but no reviewer was more scathing than the Gucci family themselves.

The Guccis have issued a statement that criticises the portrayal of Patrizia Reggiani - portrayed by Lady Gaga - as a victim of a patriarchal business. In 1995 Reggiani hired a hitman to kill her husband Maurizio Gucci, played by Adam Driver.

"The film's production did not bother to consult the heirs before describing Aldo Gucci – president of the company for 30 years – and the members of the Gucci family as thugs who were ignorant and insensitive to the world around them, attributing entirely fabricated attitudes and conduct to the protagonists of the notorious events," the family said in a statement this week.

The film will track the relationship of Gucci and Reggiani from romantic beginnings in the 1970s, through business dealings and divorce, to his highly publicised murder in the 1990s.

The Gucci’s, who have not had a stake in the fashion label since 1993, say they may take legal action against Scott, who has been accused of "stealing the identity of a family to make a profit".

For his part, Scott claims that the Gucci family’s actions - including murder and tax evasion - put them in the public domain.

But what happens when those who are in the public domain don’t like how their stories are told?

A famous figure, grisly crime, or courtroom drama can make juicy material for any would-be filmmaker, but the results are not always favourable in the eyes of those who actually lived through events. Here we dive into some of those dissatisfied with their depictions.

The prolific Ryan Murphy has fictionalised everyone from OJ Simpson to Joan Crawford for the small screen, with some amazing results. However, when "The Assassination of Gianni Versace: American Crime Story" was released the Versace family had a few choice words on his TV series depicting the murder of flamboyant fashion designer.

Versace was murdered in 1997, aged just 50 by a man who was obsessed with the designer and bragged about a close friendship with him.

The Versace family claimed they were not consulted in the making of the film, saying in a statement, “this TV series should only be considered as a work of fiction.” This is despite reports that Penelope Cruz spoke with Donatella Versace, whom she portrayed in the limited series, prior to filming.

“The picture of Ricky Martin holding the body [of Gianni] in his arms is ridiculous,” he told The Observer in an interview.

“Maybe it’s the director’s poetic license, but that is not how I reacted.”

Claimed to be Netflix's most expensive show, “The Crown'' is never short of material for real-life drama. From Prince Phillip’s extramarital affair to the Aberfan disaster, “The Crown'' has laid bare the private and public trials and tribulations of Britain’s most famous family.

Season four of the drama proved controversial as a darker side of the royals and their treatment of Princess Diana was shown to viewers around the world. A depiction that can surely only get worse as the writers turn their attention to Charles and Diana’s divorce and the untimely demise of the so-called ‘people’s princess'.

Despite bumper ratings on Netflix the series has received mixed reviews from the royals themselves, with many refusing to tune in at all. One whose opinion has been shared is Prince William who is said to dislike the portrayal of his mother and father.

A friend of his father Prince Charles said to the Daily Mail, “The Duke of Cambridge is none too pleased with it. He feels that both his parents are being exploited and being presented in a false, simplistic way to make money."

Julia Roberts charmed audiences and bagged herself an Oscar with her portrayal of the sassy, short-skirt-wearing crusader Erin Brockovich; the woman that tirelessly campaigned for the people of Hinkley who were being poisoned by chromium 6 leaking from a nearby gas transmission plant.

Roberts’ performance as the tenacious but unconventional would-be lawyer’s dogged determination for justice was a box office hit but didn’t go down so well with the town’s residents themselves.

Hinkley, which is a small town on the edge of California’s Mojave desert, is still struggling with after effects of the pollution and the townspeople were reproving of the film’s feelgood ending where all residents received a massive payout.

“The movie is mostly lies,” one resident told the Guardian.

“I wish the truth would come out, because a lot of us are upset. I understand that the movie is going to make Erin Brockovich and the attorneys out to be heroes. But where's our money?”

Many of the residents received tiny amounts of the $333 million dollars won in the lawsuit against Pacific Gas & Electric, of which 40% went to the law firm Brockovich worked for. As it was settled out of court, no public transcripts are available of the case and many victims are still in the dark as to the details.

The lawyer Brockovich works for in the film was inspired by real life attorney Tom Giradi. Giradi and his wife - Erika Jane, star of the Real Housewives of Beverly Hills - are currently being pursued for damages by plain crash victims who claim to have been swindled by him. Maybe the people of Hinkley have a point.

“What happened, Miss Simone?” Maya Angelou famously wrote of the talented - and tortured - musician, Nina Simone. Well, you can find out what happened by watching the 2016 biopic, “Nina”, which chartered the career of the famous blues singer as well as her battle with bipolar.

However, before the film was released for the viewing public it had already attracted controversy when the casting of Zoe Saldana was criticised by Nina Simone’s family.

In March 2016 Zaldana, an actress of Dominican heritage who darkened her skin and wore a prosthetic nose for the role, tweeted out a photograph of herself as Simone with the accompanying message: “I'll tell you what freedom is to me - No Fear... I mean really, no fear."

However, Simone’s Twitter account, run by her estate, responded: “Cool story but please take Nina's name out your mouth. For the rest of your life."

They are said to be unhappy with the casting of a light-skinned actress and offended by the use of prosthetics, with Simone Kelly, Simone’s daughter, saying to the New York Times: “My mother was raised at a time when she was told her nose was too wide, her skin was too dark. Appearance-wise this is not the best choice."

The unhappy family would have preferred Oscar-winner Viola Davis, or Nina Simone’s own favourite, the EGOT (someone who has won all four Emmy, Grammy, Oscar, and Tony Awards) Whoopi Goldberg.

Another Ryan Murphy creation that ticked off a star was "Feud: Bette and Joan". With the two eponymous anti-heroines, and most of the rest of those depicted, already dead, Murphy impressively managed to anger one of the few living people he’d fictionalised.

A post shared by Feud: Bette and Joan (@feudfx)

"Gone With the Wind" star Olivia de Havilland filed a lawsuit against Murphy for his depiction of her, having not initially realising she was in the series at all. De Havilland, who was portrayed by actress Catherine Zeta Jones in the anthology series, claimed she was offended by her character’s gossipy nature and foul mouth.

“No one from Fox had contacted me about this to ask my permission, to request my input, or to see how I felt about it. When I then learned that the Olivia de Havilland character called my sister Joan ‘a bitch’ and gossiped about Bette Davis and Joan Crawford’s personal and private relationship, I was deeply offended,” de Havilland wrote in an email to the New York Times.

De Havilland was famously estranged from her sister and fellow actor Joan Fontaine.

The lawsuit was ultimately unsuccessful, even after the litigious star took Murphy to the Supreme Court.