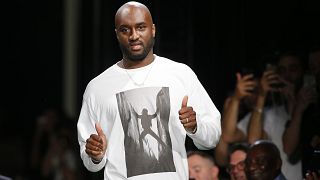 Fashion designer Virgil Abloh has died aged 41 after a private battle with cancer.

The designer, who founded the label Off-White in 2013, made history as the first Black artistic director of men's wear at Louis Vuitton.

His death was announced on Sunday by Off-White and the luxury group Louis Vuitton Moët Hennessy.

A statement from Abloh's family on the designer's Instagram account said Abloh was diagnosed two years ago with cardiac angiosarcoma, a rare form of cancer in which a tumor occurs in the heart.

"He chose to endure his battle privately since his diagnosis in 2019, undergoing numerous challenging treatments, all while helming several significant institutions that span fashion, art, and culture," the statement read.

Abloh is survived by his wife Shannon Abloh and his children, Lowe and Grey.

Abloh was a first generation Ghanaian Amercian with no formal fashion training. Taught to sew by his mother, Abloh had a degree in engineering and a master's in architecture; he started his career in fashion in partnership with Kanye West - now known as Ye.

Abloh met Ye in 2009 whilst working at a screen-printing store. After the pair interned together at the LVMH brand Fendi, Abloh became Ye's creative director. He was art director for the 2011 Ye-Jay-Z album "Watch the Throne," earning a Grammy nomination for his work.

Known for marrying high and low fashion and mixing streetwear with gouture, Abloh was a celebrated tastemaker with a wide-ranging career.

He partnered Off-White with Nike for a line of frenzy-inducing sneakers, designed furniture for IKEA, made refillable bottles for Evian and Big Mac cartons for McDonald's.

Named one of Time magazine's most influential people in 2018, Abloh’s work was exhibited at the Louvre, the Gagosian and the Museum of Contemporary Art Chicago.

Stars including Beyoncé, Michael B. Jordan, Kim Kardashian West, Timothée Chalamet and Serena Williams were all dressed by Abloh, who at the time of his death was one of the most powerful Black executives in a historically closed fashion world.

"I'm not interested in (the latter). I'm interested in using my platform as one of a very small group of African-American males to design a house, to sort of show people in a poetic way."

Stars who knew and worked with Abloh from the fashion, music and entertainment industries were quick to express their sorrow at the tragic news.

Supermodel Gigi Hadid wrote: “I am heartbroken by the loss of my dear friend, and a friend to the world, Virgil Abloh. He was 1 of 1 … You will continue to inspire me every day, V. I feel blessed and honoured by every moment.”

Meanwhile, Edward Enningful, the first black editor of British Vogue, said: “Virgil Abloh changed the fashion industry. Famously prolific, he always worked for a greater cause than his own illustrious career: to open the door to art and fashion for future generations, so that they – unlike himself – would grow up in a creative world with people to mirror themselves in.”