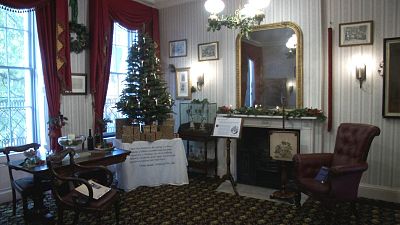 This is the room where Charles Dickens and his young family celebrated Christmas back in the 1800s.

Now the author's former home is a museum dedicated to his literary talents.

But as the festive season approaches, it is still decked out in typical Victorian decor, recreating the atmosphere of the period.

After all, The Charles Dickens Museum at 48 Doughty Street is the author's only surviving London home. But the cosy feel ensures that this is no Bleak House. It is, however, something of an Old Curiosity Shop.

Dickens is intrinsically linked with the festive season

His book 'A Christmas Carol' is an annual favourite, telling the story of miser Ebenezer Scrooge's Christmas Eve encounters with a series of ghosts.

This year, the museum has an extra holiday offering. For the first time ever, it is displaying an ivory pen given to Dickens by his wife.

The item was acquired as part of a large collection donated to the museum in 2019.

"One of the new items that we've got on display this year, just for Christmas, is an ivory pen and pencil holder, which Catherine - Charles Dickens's wife - gave to him for Christmas in 1838 while they were living in this house," says curator Emily Smith.

"It's engraved with an inscription that says 'To Dear Charlie from Kate, Xmas 1838'. And we think that Catherine probably engraved that herself with a needle."

The pen is more than 180 years old, so it is too fragile to function as a writing tool. But back when the author received this gift, it had some interesting features.

"It's an early form of mechanical pencil, I suppose. So there's buttons that if you slide it down, it would bring out some way to put your pen nib.

"Another bit that would slide it down to make it a pencil. And at the other end, there's another button that slides out a quill knife so you could sharpen your quill. So a bit of a writing gadget," explains Smith.

Other items that will make their Dickens debut include sketches for another Dickens festive tale, 'The Cricket on the Hearth', by John Leech. The pencil drawings were preparatory illustrations before the book went to print.

There's also a playbill for a production of A Christmas Carol, and a letter written by the author to celebrate the sale of 6,000 copies of his famous festive story.

The play was one of the only theatrical interpretations of this story that Dickens sanctioned during his lifetime - he often did not want to agree to other people adapting his work.

"I think Dickens is still quite a big part of Christmas because of the feelings that he writes into his stories," adds Smith.

That lovely feeling that we all have at Christmas, being with friends and family, enjoying good food, having entertainment, playing lots of games. Those things were important to Dickens in his own life, which is why he wrote them into his works. And I think that's why we still celebrate in that way today."

The Charles Dickens Museum is open Wednesday to Sunday from 10 am-5 pm. General admission is free, while tickets to Christmas events range from £8-15 (€9.50-€18).

Check out the video above to find out more about Dickens' festive treasures.