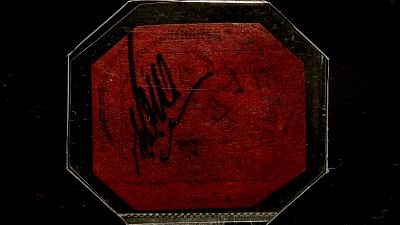 The world's most famous and valuable stamp - the 1c Magenta - has gone on display at Stanley Gibbons' flagship store in London.

The rare stamp merchant bought the stamp for 8.3 million (US) Dollars (6.3 million British pounds) earlier this year - and now members of the public can buy parts of it through fractional ownership - with the stamp being figuratively split into 80,000 pieces.

The unique 1856 1c Magenta from British Guiana was bought at auction in the USA for a total consideration of 8.307 million US dollars by rare stamp merchants Stanley Gibbons.

The sale makes it the world's most valuable stamp.

"This is more the Mona Lisa of stamps where it might not be the most beautiful but it's certainly the most famous with the biggest history and the best story and it's completely unique," explains George James, Head of Commonwealth for Stanley Gibbons.

The stamp is the only one of its kind and is currently on display at Stanley Gibbons' flagship store, 399 The Strand in London.

Its enormous price tag compared to its negligible weight - just one twentieth of a gram - makes it gram for gram the most valuable item in the world.

"We weighed it on a number of coin balances and then when you calculate the pounds per gram or the dollars per gram it is by quite some margin the most valuable item in the world by weight. So quite extraordinary really," says James.

The stamp measures 29 by 26 millimetres and features a three-masted sailing ship along with the motto "Damus Petimus Que Vicissim" which translates as "we give and expect in return".

Stanley Gibbons has created an exhibition around the 1c Magenta so that visitors can learn more about its history, including its 12 previous owners who include a murderer who tried to offer it in return for a reduced sentence at court.

Now Stanley Gibbons is offering members of the public the opportunity to buy tiny parts of the stamp through a "fractional ownership" scheme, with the stamp being figuratively split into 80,000 pieces which are available to purchase through the website.

Philatelist (someone who studies or collects stamps) Kenneth Orpwood first saw the 1c Magenta in 1963 at London's Royal Festival Hall then saw it at Sotheby's when it went up for auction. But he says this is the first time he's seen it so close up:

"This is the third time I've seen it but it's the first time I've ever seen the back of it and it's fantastic to be actually so close to it. When I've seen it before I couldn't get as near as this. It's every man's dream to find this, every philatelist's dream, sorry, to find something like this. But it's an icon in the works of stamps."

The 1c Magenta will be on display to the public at 399 The Strand every Monday, Wednesday and Friday until 17 December 2021 - with Saturday openings on 20 November and 4 and 8 December.