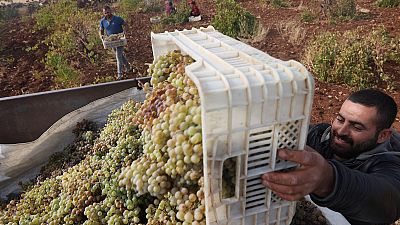 Assyrian merchant Yuhanna Aktas no longer has to hide from villagers in his conservative corner of southern Turkey that the grapes they harvest are destined to become wine.

A member of the shrinking Christian minority in Mardin province, Aktas has been waging a lonely battle for acceptance by his Muslim neighbours and local officials, who frown on alcohol sales.

"As a matter of fact, when we first started, yes, I was exposed to many attacks. Sometimes it was from our neighbours, sometimes we were subjected to official pressure. But we did not give up and decided to establish this facility," Aktas said.

Only 3,000 or so Assyrians still live in the wider Mardin province, which is part of the historical Mesopotamia region where some archaeologists believe wine was invented 2,700 years ago.

Who are the ​​Assyrians?

The Assyrian people are an ethnic minority group that have lived in the Middle East for centuries.

“Their historical homeland in Turkey is in the provinces of Mardin and Hakkari in the south-east. Around 95 per cent of Assyrians in this region have left Turkey because of persecution and displacement” reports Minority Rights Group International.

These departures have heavily impacted Mardin’s wine growing traditions, and Akta’s efforts to revive them.

"In ancient times, wine was present in every home. Like molasses and wheat, wine was part of the household needs. Wine as we know it was invented by the Assyrians," Ayhan Gurkan, President of the Assyrian Culture Association said.

Things started to turn around for Aktas after he discovered the right local grapes, including the aromatic Mazrona variety.

These grapes are also organically farmed and naturally fermented without yeast or sulphites, the additives that are usually used to prolong conservation.

"The people who used to tell me that they would rather throw their grapes in the bin than sell them to me, that they would prevent me from producing wine, these same people, once they saw the money, came to me and said, "Don't get tired, give me my commission and I'll pick the grapes for you,” Aktas said.

He has even launched a second production site in his home village of Beth Kustan, which is about 30 kilometres from the vineyards of Midyat.

Ever since the election of Erdogan's Islamic-rooted AKP party in 2002, alcohol tax has risen while local sales restrictions remain.

In May, the Turkish government banned alcohol sales during a 17-day COVID-19 lockdown, angering many secular Turks.

Despite the added pressure from these impositions, they have actually led to a boom in sales, says Aktas, who is hoping the same could happen to Assyrian culture in Turkey.

Ancient Greek God statue heads have been discovered in Turkey