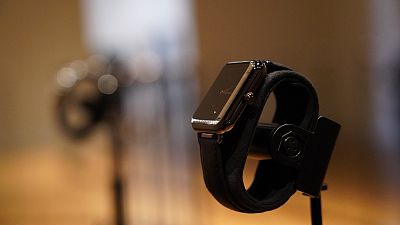 At The Grand Prix d'Horlogerie de Genève (GPHG), dubbed the “Oscars of the watchmaking industry,” one luxury timepiece stands out among the rest. Between bejewelled creations and intricate moving cogs sits a simple, black watch face.

What appears to be a high-tech smartwatch is actually a mechanical entry in the “Men’s” category by Switzerland-based H. Moser & Cie. When flipped over, all the intricacies for which Swiss watchmaking is best-known are revealed, cogs and wheels collide in a symphony of artistry and technique.

Edouard Meylan, CEO of the almost 200-year-old company based north of Zurich, said they had the idea for the creation back in 2016, when Apple and other tech firms were unveiling connected wristwatches.

“People were asking: ‘Are you going to create a connected watch?’” Meylan tells Euronews. “Why would I do that?… We are completely different, what we create are long-lasting products with craftsmanship.”

The response was the 26,000-euro “Swiss Alp Watch”, its last edition on display in a touring exhibit of shortlisted award entries. It is a mechanical timepiece with dials finished in Vantablack, a “super-black” coating originally developed for use on satellites.

“(The) design is obviously inspired by connected watches, but mechanical, explaining that, yes, there's a new trend, there's a new category, and we can get inspired and work with these kinds of categories,” said Meylan.

Amid a growing global smartwatch market, many in the industry believe the connected devices serve a different function to traditional timepieces. Several brands, particularly those operating at the higher-end, don’t consider the likes of Apple and Samsung to be competitors. For now, at least.

Indeed, aside from H. Moser & Cie.’s tongue-in-cheek creation, the influence of connected watches is almost non-existent at this year’s GPHG awards, an annual barometer for the industry as a whole.

“Digitalisation is a challenge, but it's also a risk. I think the real strength of the watch industry is the traditional mechanic watch industry,” said the award’s president Raymond Loretan.

It’s been over six years since Apple launched its first connected wristwatch. In 2019, the Cupertino-based tech giant shipped 31 million units of its Apple Watch, about ten million more than all Swiss watch brands combined, according to Strategy Analytics.

“There is a war for the wrist,” said Karine Szegedi, consumer and fashion and luxury lead at global accounting giant Deloitte.

“The wrist is very demanded because, of course, you have two wrists, no more. So, what do you wear, a luxury watch or a smartwatch?”

When you go out at night...you want to have a proper watch. A watch with a statement, with a design, with an emotion...not a battery with overkill of information

According to Deloitte’s Swiss Watch Industry Study, published in early October, the global market for smartwatches has more than doubled since the second quarter of 2018, rising from 8.6 to 18.1 million units by the second quarter of this year. A fitness renaissance during coronavirus lockdowns has only made wearables more popular.

Some traditional watchmakers - including TAG Heuer, Louis Vuitton, Hublot and Montblanc - have taken the dive into connected wristwatches - with devices offering data on international time zones, football and basketball scores, even golf courses - others have steered well clear.

“Most Swiss watch executives think the Swiss watch industry has just entered the market too late and probably missed the boat,” said Szegedi. “Because they cannot keep up with the large technology companies.”

Deloitte’s study says while smartwatches are still seen as a threat, traditional brands are stepping up their game and consumers increasingly prefer to own both.

“We see a regain of interest in the nice Swiss timepieces more and more,” adds Szegedi.

Indeed, amid a post-lockdown rebound among high-end Swiss watchmakers, where for many export values have already recovered to pre-pandemic levels, there’s little concern about the threat of smartwatches.

“In our price point, we’re not impacted by the digital watches,” said Georges Kern, CEO of Swiss-based Breitling, which has four entries shortlisted in The GPHG.

“When you go out at night, when you have nice shoes, nice drive. You want to have a proper watch. And a watch with a statement, with a design, with an emotion, with a story related and not a battery with overkill of information.”

It’s a similar picture for H. Moser & Cie., which now produces around 2,000 watches a year. CEO Meylan said demand has been “crazy”.

“Like many other brands, we are experiencing an amazing year,” he said. “I don't know how long this is sustainable, but the demand is so high, nobody can really cope with it.”

And what about creating a connected watch, has Meylan changed his mind? Now, just as in 2016, the answer is still: no.

“Young people want to have things they can relate to, that they understand, we don't really understand how those Fitbit Garmin work, it's all electronic and when it's broken you throw it away,” he said.

“Whereas a mechanical watch, to some extent, you understand what's happening in there.”