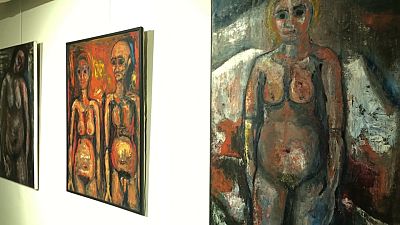 The Evaristo Estivill exhibition at the Renaud Foundation in Lyon, France.   -   Copyright  Euronews
By Euronews  •  Updated: 27/10/2021

A retrospective of the Spanish painter Evaristo Estivill has been inaugurated in the French city of Lyon, featuring oils, drawings, and paintings by the self-taught artist.

Forced into exile in 1939 after the Spanish Civil War, Estivill suffered the harshness of the concentration camps in southern France during World War Two.

With the force of raw art, his paintings bear witness to the suffering he has experienced and question the human condition.

"The red thread would be the human condition. It reminds us that as humans we will die one day, but precisely, through those works that perhaps represent death and that can even be violent, they also remind us that we must live life fully. I think that is what Evaristo wanted to express," Stéphanie Rojas- Perrin, curator of the exhibition, told Euronews.

Displayed on the walls of the Fort de Vaise at the Renaud Foundation, the exhibition has been sponsored by the Consulate of Spain.

"What we also wanted in the figure of Evaristo, is to pay tribute to all that generation of Republican exiled Spaniards," said Juan López-Herrera, Consul General of Spain in Lyon. "Half a million Spaniards crossed the border in just two weeks and settled in France."

As a young shepherd, Estivill went to work in a factory while learning to paint at night.

He established his self-taught school by copying pictures at the Museum of Fine Arts.

"We lived surrounded by paintings and brushes in a small apartment. I always saw my father paint," revealed Ariel Estivill, the painter's son.

"And his paintings are a reflection of what he lived through. There are fears of the exodus after the war, but there is also hope," he went on.

The exhibition will go through December 19 and can be visited among other activities, such as a concert, readings, and conferences.