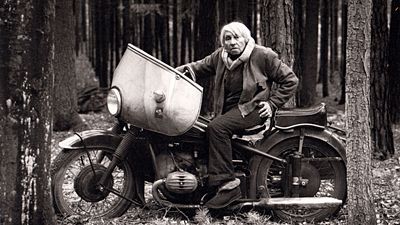 A seated wooden figure, holding its legs and pressing its face to its knees.

Grief, as the sculpture by German artist Louise Stomps is titled, was made two years after the Second World War ended.

By that time, Stomps' works had been banned by the Nazis under Hitler, her apartment had been destroyed in an air raid, and she was living in Berlin, which was to a large degree devastated after the war.

A new exhibit by Berlin's Verborgene Museum wants to reintroduce Grief and other works by Stomps to a wider public in what will be the artist's first retrospective. Over 90 pieces of her progressively abstract, sculptural work will be on display.

The project aims to highlight forgotten female artists and is hosted by the Berlinische Galerie.

They hope to show a younger generation an artist that could have been considered one of "the greats" if she had been born at another time.

"We can't say that she is influential. But we are in the process of making her well known. But this is a moment that still has to be found," says Marion Beckers, director of Das Verborgene Museum and curator of exhibit.

Why was Louise Stomps' work banned under Hitler?

The National Socialists came to power under Hitler, and artists like Stomps could no longer work freely.

Modernist art was banned in Nazi Germany on the grounds that such works were considered deeply un-German, an "insult to German feeling". Those that continued to work on art during this period were accused of aligning with Jewish or Socialist values.

Stomps continued working up until the end of the German Reich, but much of her work is lost from this time. Her apartment, which also was her studio, was bombed during an air raid in 1943.

"We don't have many works from this time because in 1943 her apartment got fully bombed out and she lost everything. Luckily, she had buried a few pieces that she could later retrieve," explains Beckers.

The exhibition has been in the works for years

Beckers confirms this exhibition has been a high-priority pursuit for the museum for several years.

"We think that Louise Stomps belongs as one of the important sculptors of the 20th century in Europe. And we have a selection of her works here that range from 1928 to 1988, the year that she died."

Much of the collection is composed of Stomps' post-war works. She had been making sculptures since she was a teenager, but it was only after she divorced her husband that she fully embraced the art from her base in Berlin.

"Louse Stomps started as a sculptor in 1928, relatively late as she was born in 1900. But then she sculpted with her whole passion, her whole energy and with all her ambition. She was married before and had two daughters but was after that freely to be a sculptor," says Beckers.

Gender-routed problems continued to hinder her progression and recognition in the German art world. In post-war Germany, female artists were often sidelined, and the male artists took centre stage right up until the 80s.

The artists wasn't around long enough to see this transition come to full fruition - she was often pictured on a motorcycle, and unfortunately died in an accident at the age of 88, in 1988.

Stomps became largely forgotten - hence the incentive to remind the people of Berlin how she contributed to wider sculptural movements.