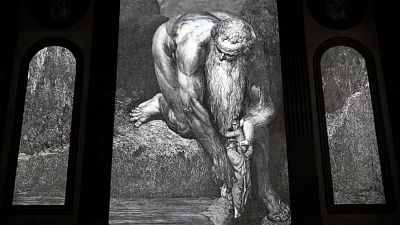 September 14, 2021 marks 700 years since the death of Dante Alighieri - one of the world's most renowned and influential writers, poets, and philosophers.

To celebrate his legacy, 130 engravings by French artist Gustav Dorè illustrating the Divine Comedy have been animated in 3D and projected inside the Basilica of Santa Croce in Florence.

The animations created by modern technology also have the signature of Italian artist Felice Limosani.

"Along the centuries we have moved from parchment to pixel. The Divine Comedy has been moved to various devices: books, photography, cinema," says Limosani.

"Today in the digital era, I felt it was my duty to add another layer to the reinterpretation of the Divine Comedy, so I started from the engravings of Gustave Doré, a majestic work of 135 prints, that today can be animated".

The video projection offers an extract of the scenes taken from Hell, Purgatory, and Paradise.

The idea is to take visitors on the fictional journey the poet used to give his unique critique on religion, morality, politics and society.

"It is a deep moral journey, and it's useful to get to know Dante's entire text, from a didactical point of view, but also from a moral point of view," says Lucia Battaglia Ricci an Italian literary historian who helped Limosani choose from Doré's 135 engravings.

Dante Alighieri died of malarial fever in the early hours of September 14, 1321, aged 57. He was on his way back to Ravenna, one of the many cities where he was forced to find shelter and protection after he was banned from his home city of Florence.

He is the most iconic poet in Italy and is known as the father of the Italian language.

The exhibition runs at the Pazzi Chapel of the Basilica of Santa Croce in Florence from 14 September to 10 January 2022.

Birds are developing larger beaks to cope with climate change

Wine leads the way out of tourism slump for Portugal, Greece and Italy