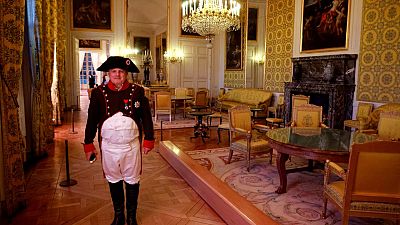 "Long live the emperor!" proclaim the grenadiers of the imperial guard as Napoleon and his brother-in-law, Prince Murat, pass through the Grand Trianon square.

Over the course of a weekend, 350 re-enactors took possession of the Trianon estate in the Domain of Versailles, just outside Paris. They are there at the invitation of Laurent Brunner, director of the "Palace of Versailles spectacle" to revive, for the first time, the year of the bicentenary of the emperor (Napoleon died in May 1821), when his residence was Versailles.

With demonstrations of weaponry, cavalry, cannon-firing, and reconstitution of bivouacs, the 7,000 visitors have plenty to keep them amused.

Around a hundred infantry and around twenty cavalry took part in a rally at 10:30 am in front of the Trianon.

Then the spectators, mostly families with strollers, followed the troops returning to the bivouac below the castle. There the soldiers and the public meet the "vivandières", the women who took care of the stewardship. The hotpot is already heating up on the various campfires as the men take off their formal uniforms, ready for a good old nosh.

Further on, a reconstructive doctor explains, using period instruments, how medicine was practiced on the Napoleonic battlefields.

Meanwhile, Prince Murat, wearing his feathered hat, a civilian entrepreneur, receives his staff for lunch in his tent.

Patrice, a 52-year-old civilian firefighter, donned the uniform of General Belliard, Prince Murat’s chief of staff. “It is the biggest and most beautiful event of the year of Napoleon's bicentenary. A simple soldier when I started 25 years ago, I climbed the hierarchy until today I am a general. kept all my uniforms, the first of which was made with my own hands ".

The Emperor appears after lunch. "Can we take a selfie?" A lady asks him. Immediately everyone claims their souvenir photo with Olivier, the actor who slipped into Napoleon's skin for the weekend.

At the end of the day, 250 people in period costume flock to the golden gate to take part in the "Empire party" evening at the Grand Trianon. They walk through the gates at sunset to the sound of the drumbeats of a detachment of the Republican Guard, present for the occasion.

Among them is 48-year-old Delvis, Cuban by origin, but has lived in France for 20 years. "I discovered Napoleon with French literature in Cuba when I was young. There is a large Napoleonic museum in Havana which has many unique objects including one of the Emperor's watches. This evening is my birthday present.

Brunner considers the weekend a success. "The army has been at the heart of our nation for more than two centuries. It is great to have been able to organise this military reenactment at Versailles. The French have a passion for history and a particular affection for Napoleon, and it shows."