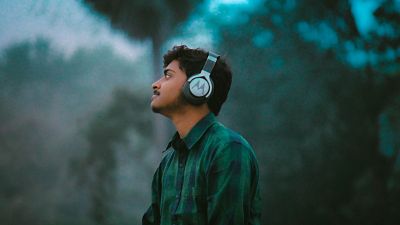 Are you lying on the beach making the most of the last weeks of the boreal summer, or embarking on a road trip to the mountains? Or (with less luck)working in the office?? Wherever you may be, a good podcast is the perfect companion.

Of course, we suggest you try the Euronews’ award-winning podcast Cry Like a Boy, available in English and in French as Dans la tête des Hommes. If you have already given it a listen, our team suggests their favourite podcasts. The team is international and speaks multiple languages so expect recommendations not only in English and French, but also in other languages such as Russian to Spanish.

She is one of the three co-creators and main producers of Cry Like a Boy. She wrote the episodes on Senegal and Liberia. Originally from Valladolid, in Spain’s sunny central region, she has been living in France for several years.

This is not a podcast about solving a mystery. The story of former Italian Prime Minister Silvio Berluscconi is far from unknown. His histrionic personality has already ensured his place in the media.

This podcast is narrated with irony and fine humour by comedian Whitney Cummings, who manages to hook me into Berluscconi’s surrealistic story and surprise me with every twist and turn of the script. It's entertaining and addictive, pure "Bunga bunga". Plus, you also get to understand passages of Italy's recent intricate political history.

Imagine you are white, middle or upper-middle class and you have the best intentions in the world so you want your children to go to a school with Latino or African-American children with fewer resources. It is almost an ‘act of charity’ so that the authorities do not overlook these public schools and your ‘generosity’ contributes to a more equal education system.

This is the approach of this New York Times investigative podcast: the good intentions of a group of white American parents who end up with the worst of outcomes. Not only do they fail to improve New York's public education system, they further undermine it. How? Give it a listen to find out.

This Chilean podcast is probably my favourite, and not just because of the incredible stories it tells, but because of the way it narrates them. From polyamory to euthanasia, this podcast explores many diverse topics. With its so-called soundscapes, it immerses you in the lives of its characters and moves you like no other podcast (at least I) have ever listened to.

Who says women can't be funny? Or rude? Or vulgar? This Spanish podcast fights to break taboos about what women should (or shouldn't) talk about. Hosted by Spanish comedians Victoria Martín and Carolina Iglesias, they talk about absolutely everything without limits.

They are funny, rude, vulgar and also hilarious. However, this is not a podcast only for women, it is like any other comedy and interview show, but with two brilliant hosts becoming pioneers in an area (at least in Spain), where women have been given little space: comedy.

She is our Cry Like a Boy project manager. Originally from the UK, she has been living in France for a number of years and has fully adapted to the way of life.

This podcast is an intimate account of a shocking first-person experience. Like a friend telling you something incredible that has just happened to her or a secret that she had not dared to reveal until now. But not only does she tell it to you, she practically whispers it in your ear. The experience is so intimate that you will feel as if it were happening to you at that very moment. And the stories can lead you to experience everything from unexpected romances to terrifying situations.

She is our Cry Like a Boy intern from Utrecht in the Netherlands, the person behind our social media campaign and all of the things you learned about Liberia on our instagram account

Anything about North Korea fascinates me, especially when it’s about the almost perfect crime - The Sony Hack. Investigators blame North Korea, but Pyongyang denies involvement. BBC journalists Jean Lee and Geoff White reveal details about the North Korean group behind the attack and the sociopolitical reasons for it.

25 years after the fall of Srebrenica two Dutch journalists tell the story of what happened, especially for people like them, who were at the time mostly busy with playing outside and were too young to read a newspaper.

Day by day the podcast reconstructs the last days in July before the fall by talking to people who were there, Bosnians and Dutchbat soldiers. A heavy piece of history, but I’ve never been more intrigued by a story.

Marc-Marie Huijbregts and Aaf Brandt Corstius have an opinion about anything. And I love that about them. Every episode they review something completely random; time, moving, grocery stores, even an episode about eggs. It's hilarious.

She is the voice of Cry Like a Boy in English. Originally from the Philippines, she grew up in Ireland and now is exploring her new home in London.

I started listening when I was 14. My introduction to podcasts and to science communication as a whole, and still remains to be very influential in how I like to tell stories today. Communicating science is so challenging, but these guys are masters at it.

I love everything about New York. The Bowery Boys tells the history of New York in a way that doesn’t feel suffocating or antiquated. Listening to them feels like listening to friends tell you hot gossip.

Co-creator of Cry Like a Boy from the Olympic city of Sochi in Russia, she is one of the three main producers and writers of the show. If you listen to Cry Like a Boy, you travelled with her to Burundi and Guinea. She is based in Lyon, France.

Rough Translation by NPR attempts to understand and explain cultural mistranslations that have been present since 2017. They haven’t produced that many episodes, but to this day, it’s one of my favourite documentary podcasts and a real inspiration. From American surrogates having Chinese babies, to the US soldiers attempting to speak Afghan languages, they teach us about the importance of respecting other cultures in a way that is not cliche. If you like Cry Like a Boy, I feel this show will be right up your alley.

Wind of Change is an excellent listen for those who like intrigue. In the course of 8 episodes, journalist Patrick Radden Keefe explores whether the Scorpions hit Wind of Change was written by the CIA to instigate the collapse of the Soviet Union, and does so with mastery and wit. I was born at the end of the 80s in the Soviet Union and I know this song by heart. Of course, I love this show!

I am a big fan of documentary podcasts, and this Russian show is a gem that I love dearly. Stories of the Russian Sex explores more than just carnal pleasures, but rights, relationships, politics and even linguistics. Through stories of several generations of Russians, you learn the very complicated history of the country in a way that makes you want to listen to it again and again.

He is the third co-creator and producer of Cry Like a Boy and one of the few men on the team. You can enjoy his investigative skills by listening to the Lesotho episodes. After many years abroad, he is back to his Italian origins, but exploring a new city between the Adriatic sea and the Alps: Udine.

It's a comedy about a guy who gets fired by Tom Hanks. Why? Because Hanks thinks the guy has “dead eyes”. With this pretext, actor/comedian Connor Ratliff manages not only to exorcise his own wound (having been sacked by a legend), but also, with the help of several famous guests, to gut the workings of the film industry. All in the key of humour and mystery.

Real-life story of a boat mechanic in a small town in Italy who gets hired by the Colombian and Spanish drug cartel to smuggle cocaine and becomes a police informant.

Originally from Senegal and currently based in Nairobi, Kenya, she is managing the promotion of Cry Like a Boy both in English and French and creating all kinds of multimedia content around the podcast. She is an excellent interviewer and has given her voice to the last episodes of the first season of Cry Like a Boy.

Here’s a fact: the more I grow up, the more the conversations that I have with most of the people I exchange with usually revolve around psychological themes. If not to start our conversation, we would always end up reflecting on random subjects. Thus this podcast drew my attention because it explores the depths of human potential and talks about all the cognitive aspects of life, cognitive skews in relationships, mental health, etc.

I love listening to general conversations that revolve around family, friends, social life and just listening to what others have to say about some complex situations. The creator of this podcast is a young Senegaleese woman living in Germany and works in science. As a young Senegalees woman too, it was through her I could really identify myself. It's the case of this podcast. The conversations revolve around general topics like family, friends, social life and stories happening in Senegal. Trilingual podcast.

Joy, gossip, misfortune, work and family life. Life in Ratanga represents for me this typical fun “African atmosphere” and this gives me life. This series tells the story of a health centre that tries to provide the best possible care for the inhabitants of Ratanga, a fictional neighbourhood in an African city. Ratanga is also the name of the radio drama that deals with issues of sexuality, motherhood, violence and women's right to emancipation in an entertaining way.

She is the voice of Cry Like a Boy in French (Dans la tête des Hommes). ​​She is of French-Tunisian origin and based in Senegal, where she works as an international correspondent. She has been an invaluable source of ideas from the very beginning of the podcast.

Tackling the issues of communities and religion in France.

This is a podcast about Afrocaribbean pop culture.

The host, Thomas Messias explains about how toxic masculinity and manhood behaviour has influence on science and culture.

The first podcast on Arabs and muslim sex life.

And of course if you haven’t listened to it yet…

The first podcast produced by Euronews explores the pressure to be “a man” can damage families and whole societies and gives voice to those trying to challenge traditional gender roles. The first season takes us from Burundi to Liberia mixing documentary episodes with conversations with experts, writers, and activists from Africa to Europe.

You can listen to it both in English and French.

Podcast | The women who redefined the frontline in Liberia's civil war