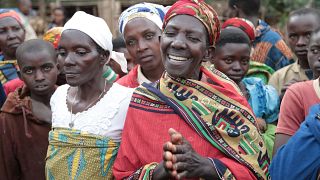 "It's not complicated. All you have to do is shut up and look pretty!" some men say. "A woman doesn't talk."

This is an opinion shared in many parts of the world, but it is especially true in Burundi. In this country, women have to ask their husband's permission, even to visit their parents, otherwise, they can be repudiated. Considered for their physical beauty and the good management of their household, they have to keep a low profile to avoid cultural prejudice and violence.

According to 2009 figures, women represent just over half of the population of Burundi. In a country where the economy is mainly rural, based on agriculture and livestock, Burundian women represent 55.2% of the 90% of the agricultural labour force. Agricultural production is divided between products for export, such as coffee, tea, and cotton, and food crops.

However, despite their density, women are not sufficiently represented in decision-making at home and in the workplace. When a woman wants to enter politics, she has to ask her husband's permission in order not to break up the household. Without inheritance rights, if she does not have a home, she can quickly be called "shameless".

A country impacted by gender inequality...

Located in the eastern part of the continent in the Great Lakes region and with a population of around 12 million, Burundi is one of the smallest countries in Africa. The country is landlocked and surrounded by the Democratic Republic of Congo to the west, Rwanda to the north, and Tanzania to the east and south. It is a country with a hot and humid tropical climate whose capital since 2019 is Gitega, the second-largest city in Burundi.

It is also a country affected by gender inequality, which is largely explained by traditions and customs that discriminate against women in society. As a result, women are victims of all forms of violence.

A study by Impunity Watch, an international human rights organisation, shows that 97% of victims of violence are women.

This discrimination against women can be seen, for example, in the area of inheritance, where women have no right to inherit land. But also in the different language surrounding the role of women and men in society. For example, "a woman cannot speak in the presence of a man."

Today, many Burundians are aware of this discrimination and are committed to fighting against gender inequalities for better social cohesion.

Please find below a series of photos where you will see images of traditional Burundian rural men and women in the provinces of Ngozi, Kirundo (Ntega), Kayanza, and in Bujumbura. These photos were taken by Clarisse Shaka and Evrard Ngendakumana for Euronews.

A redefinition of roles in progress

Nevertheless, the situation is beginning to change. More and more Burundian women are crossing certain cultural 'barriers' without men being surprised. Especially with the introduction of the specific law on gender-based violence a few years ago. And the representation of women in institutions slightly exceeds the 30% required by the constitution in some instances, notably the National Assembly.

Cry Like a Boy is an original Euronews series and podcast that explores how the pressure to be ‘a man’ can harm families and entire societies. The series promotes a global debate on fulfilling respectful masculinity and just won the best audio project at the WAN-IFRA Europe Digital Awards.

The series takes you to five African countries, one of them being Burundi. . There we tell you about Abatangamuco and discover men who are trying to change things at the community level by using theatre to raise awareness in their society.

Listen to Cry Like A Boy on Castbox, Spotify, Apple, Google, Deezer, or wherever you listen to podcasts and don’t hesitate to rate us or to leave a comment.