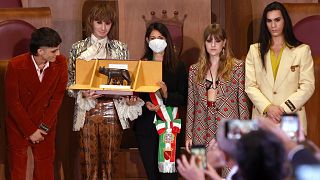 Eurovision-winning Italian rock band Maneskin have been honoured by the mayor of Rome. The four members were given a small replica of Lupa, the she-wolf who as legend has it nursed and sheltered the twins Romulus and Remus and became a symbol of the city. Since winning the contest they've become stars across Europe.

“I am aware of Spain that is going very well,” says singer Damiano David on the countries where Maneskin are selling records. “Russia is going very, very well, England and Netherlands. Scandinavian countries."

The band ooze high-energy and high camp. Sexuality and gender are at the centre of their music and look. They say they want to convey an inclusive message of tolerance, somewhere between carefree and quiet rebellion.

Maneskin are now number one on the streaming platform Spotify with millions of people listening to their last album and latest single "I Wanna Be Your Slave".