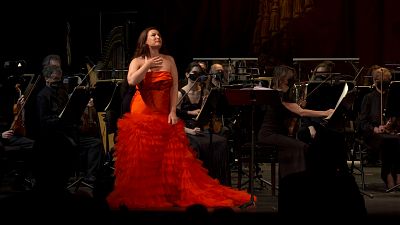 Acclaimed Bulgarian soprano, Sonya Yoncheva, delves into the depths of Spain's culture and heritage with her first-ever concert dedicated to Zarzuela.

Her awe-inspiring performance of the Spanish musical artform took centre stage at the Teatro de la Zarzuela in Madrid in April.

Zarzuela, often called the Spanish operetta or the Spanish musical comedy, is a fusion of song, prose and dance. Spanish conductor, Miquel Ortega, the musical director of Yoncheva's concert in Madrid says that the art form "is very old and it dates back to almost 1650".

The subjects in Zarzuela vary, ranging from mythological stories to modern-day life. Most Zarzuelas include vocal ensembles, like trios and duets. The lyrical solos are known as romanzas.

To Yoncheva, her love for Spain and the people's "direct mentality and their joie de vivre" are just some of the reasons she wanted to sing Zarzuela. She also tells us that she loves "countries who defend their authenticity and Spain does this", it does this via Zarzuela as well.

One of the most interesting periods for this style of music came at the beginning of the 20th century. That's when you found the "real masterpieces", Ortega tells us. One of these is a beautiful Zarzuela by Federico Moreno Tórroba dating back to 1928. It's called La Marchenera. It's also Yoncheva's favourite. She describes it as "so sensual. "It is the most delicate and silky way of explaining the state of mind of a girl who is completely in love".

Madrid was once a thriving creative centre for Zarzuela. The theatre, named aptly after the Spanish music genre, opened in 1856 on the 10th of October to mark Queen Isabella II's birthday. It is modeled after La Scala in Milan. The iconic theatre has become known for reuniting several generations of audiences and for attracting anyone and everyone interested in Spanish culture. It is still the one and only building dedicated to the musical genre.

It's unsurprising that Yoncheva has taken to this lyrical genre so full-heartedly. As she says herself, she has "always been fascinated by comedy, by heartbreaking love stories and also by the sensuality that this music radiates". This combined with her curiosity and openness to every kind of music, makes Zarzuela and Yoncheva a match made in heaven.

By performing this concert of Zarzuela in Madrid, Yoncheva has once again shown her ability to adapt to new genres and transcend the music. She tells us that she allows herself "to travel through other musical worlds", she loves doing that. "It's the freedom I've chosen as an artist", she says. So the question is what more musical adventures await?