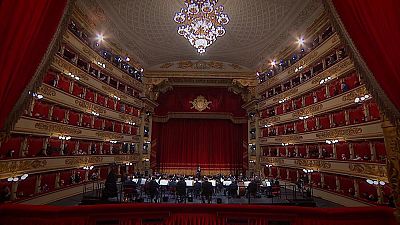 The Vienna Philharmonic's usual home is the Musikverein, but it does move and play in other exceptional locations.

The Viennese orchestra's recent performance at La Scala in Milan under the baton of Riccardo Muti was one to remember. Their long tradition of playing at Milan’s temple of music shone through to amaze the audience.

Daniel Froschauer, the chairman of the Vienna Philharmonic, describes their performances there as bringing their way of playing at the Musikverein to La Scala "and this is how La Scala turns into the Musikverein".

For Muti though, it was like a walk down memory lane, as he returned to the place where he was the music director from 1986 to 2005.

Dominique Meyer, the current opera director at La Scala, was enthusiastic to see Muti back in Milan and he says that he invited him "to conduct this concert for one reason: I wanted to see him happy in an opera house where he used to work so much, where he had and produced such moments of glory".

For the occasion, Muti put on a very German programme that included Mendelssohn, Schumann and Brahms.

Michael Bladerer is the general manager of the Vienna Philharmonic. He says that in the programme at La Scala "there are some moments where you get goose-bumps".

He mentions a moment in the Schumann Symphony, the transition between the 3rd and 4th movement. To him, it's "the most romantic that exists in the whole history of music". It's a moment in the music that he especially looks forward to. Experiencing it at La Scala felt like a privilege, he explains.

He does admit though that he expected Muti "to have chosen more Italian music, but it was what he decided and this is just amazing because those are pieces of music with which we share a common history".

Bladerer adds that the Vienna Philharmonic premiered the second Brahms symphony in December 1877. It's a piece of music that Froschauer describes as "part of our DNA".

"You can also feel that during the time that Brahms wrote the second symphony he was incredibly happy. It touches your heart. It is one of the most perfect symphonies", he adds.

But 2021 did not just bring about this marvellous performance, it's also a historic year for Riccardo Muti. He is celebrating 50 years of directing the Vienna Philharmonic and his 80th birthday is also at the end of July.

Muti is a conductor with decades of experience. He has worked with some of the most known and respected musicians and orchestras throughout the world, including London’s Philharmonia Orchestra, the Berlin Philharmonic, the Bavarian Radio Symphony Orchestra, the New York Philharmonic and the Orchestre National de France.

Muti was invited to conduct the Vienna Philharmonic’s 150th-anniversary concert. It was at that time he was awarded the Golden Ring, a special sign of esteem and affection, only given to a few select conductors.

However, the best description of Muti and his work comes perhaps from fellow musician, Froschauer, who says "I can play with Riccardo Muti in La Scala. For me, this is the greatest honour for a musician. It’s a dream and if you’re able to recognise this, then you are a happy person".