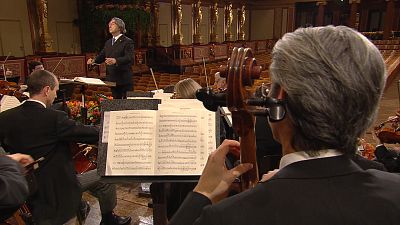 The Vienna Philharmonic started 2021 with flare and grace at its New Year's Concert, despite the absence of an audience. In the Philharmonic's long history, never before has the New Year's Concert ever been played without in house spectators. But the unfortunate high rates of Coronavirus infections meant that this year the Austrian Federal Government decided that no concerts could be performed before audiences. The Vienna Philarmonic overcame this by broadcasting to millions of TV viewers in over 90 countries around the world.

Under the baton of Riccardo Muti in the Golden Hall of the Musikverein, the music of the Johann Strauss family's vast repertoire and its contemporaries was in the spotlight. Among the famed polkas, waltzes and marches was the work of Austrian composer, Franz von Suppè, known for his operetta “Poet and Peasant”.

Daniel Froschauer, the Chairman of the Vienna Philharmonic, says he was really happy that they could showcase “composers who lived at the time the Strauss brothers lived and wrote music that it's similar but different”.

The conductor himself describes the concert's selection as "not only optimistic music, that's the reason why this music this year has a meaning that is even more deep. The music of Strauss is a music of joy and happiness and a music of sadness and nostalgia”, a range of emotions fitting for this new year.

The message he wants to convey is "joy, hope, peace, brotherhood and love with a capital L", "music is not only a profession but it's a mission to make the society better!".

In this lifetime, Von Suppè composed over 30 operettas, the majority of which have sunk into relative obscurity with "Poet and Peasant" and "Light Cavalary" being the main exceptions.

'Dichter und Bauer' (Poet and Peasant) was first played in 1846 at the Theater an der Wien in Vienna. It's an operetta in three acts and it is set in Upper Bavaria. It tells the story of several love triangles and romance spanning across various social classes. It ultimately ends with every character getting what they deserve.

The cello solo at the start of the operetta is described by Daniel Froschauer as a very special moment to him, “I can see the maestro almost doesn't conduct and he lets our solo cellist play. And the melody is really beautiful and the whole atmosphere of the moment, the trust in the musician”.

Riccardo Muti has had a special artistic partnership with the Vienna Philharmonic for almost 50 years. With over 500 performances with them under his belt, he now has a deep understanding of the Philarmonic's specific sound.

In his speech during the New Year’s Concert 2021, M°Riccardo Muti raised awareness for the significance of the arts and classical music for our society.
We also hope to play in front of live audiences again soon, as playing without it is not the same.https://t.co/NO2LYt7JFH

Muti says his years of experience in Vienna have allowed him to absorb the "tradition of the Viennese sound, of Viennese phrasing, this velvet sound that the Vienna Philharmonic has, that is unique in the world". It is perhaps one of the many reasons he was awarded Honorary Membership to the Vienna Philharmonic in Salzburg on his 70th birthday in 2011. As well as years of hard work with Vienna, Muti has also conducted with some of the most important orchestras in the world.

Music is the universal language of hope & peace - and can bring humanity closer together while we are physically distanced.

The @Vienna_Phil's New Year's Concert was an uplifting way for me to start the year.

Let's make 2021 a year of hope & healing for everyone! pic.twitter.com/uU4Y6yUNfr

The overall goal of this very special and particular New Year Concert from Vienna is best described in the words of Daniel Froschauer:

“As ambassadors of music, and together with maestro Muti, we would like to send a message of hope and optimism".