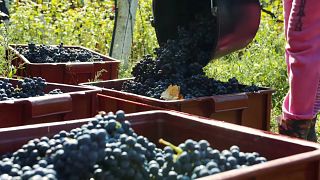 A vineyard in England's Malvern Hills has followed in the famous footsteps of Beaujolais and made an early bottled release in the UK's first attempt to play the French at their own game.

The county of Herefordshire is perhaps not the first place you might imagine taking on the heritage of a world renowned wine region. But one winemaker is doing just that - having signed a deal to sell his wine with a high-end British supermarket chain.

Simon Day is a biochemist who has travelled the world studying winemaking techniques.

He believes rising summer temperatures are providing a boost for British winemakers as increased temperatures ripen fruit faster enabling farmers to experiment with grapes rarely grown in Britain before.

But it's not just the higher temperatures that account for the wine's success.

“Being a biochemist helps with the science of winemaking," he explains. "It’s really handy if things start to go wrong, but the main thing you rely on is your nose and your pallet.”

The way the wine is produced also differs from traditional methods. The vineyard uses carbonic maceration which keeps the juice inside the grape, speeding up the fermentation process.

The result is 2,500 bottles from grapes grown this summer.

Uncork Luke's report in the player above.