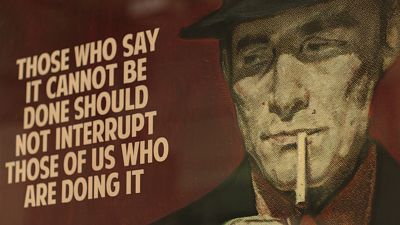 In 2014 it was revealed to the art world that the mysterious pseudonym ‘The Connor Brothers’ was, in fact, artists James Golding and Mike Snelle. Since then their name and unmistakable style—pithy slogans on pop culture backdrops—have become recognisable around the world.

The UK-based pair now hope to reach a larger audience with the addition of their Arabic art. It is the first time the artists have incorporated another language into their work.

The unique pieces were supposed to be unveiled at an exclusive exhibition in Dubai but due to COVID-19 restrictions the exhibition was taken online where they sold Arabic and English artworks to the Middle-East region.

"We were more than happy to go ahead and do something in a format that we've not done before," explained Golding. Twenty per cent of their earnings was donated to the United Arab Emirate’s Community Solidarity Fund against COVID-19.

No strangers to charitable causes, in April the Connor Brothers sold 300 artworks in 30 minutes to help raise money for the UK's National Health Service.

No topic too taboo

For the Connor Brothers, no topic is prohibited from their art. "Very early on we used humour as a means of softening the edges of really complicated things," James Golding told Euronews. "We always make a joke no matter how dark the topic and I think that has carried on throughout the work. It's often a little bit dark but it also has a good sense of humour."

According to Mike Snelle, the comedic relationship the twosome share helps remove any judgement or pressure when producing art together: "It has always been humbling the other one, or humiliating the other one."

Referring the current health crisis Golding added: "Hopefully, this situation is another negative but temporary chapter which will bring something positive and creative out of it."

Hundreds gather in London over the death of Mahsa Amini