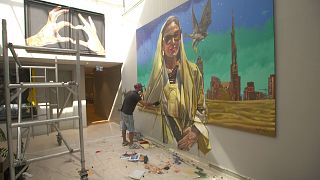 European artists Paparazzi and The Connor Brothers are making their mark on the Dubai art scene. Cult catches up with them to see how they are continuing to showcase their work despite Covid-19 forcing many galleries to temporarily close their doors.

We meet renowned street artist Paparazzi as he prepares for his latest exhibition. It’s the first time the Georgian born and Cyprus based graffitist has showcased in the Middle East.

"I think it was a good opportunity to show my work, you know, to do a great show here in Dubai. I love it. It’s a very big contrast after Cyprus and after Athens,'' he explains.

"What I’m doing now is new muralism, I would say, but it still has graffiti elements and I will never ever stop doing stuff on the streets, because on the streets you have a strong voice."

Once considered vandalistic Paparazzi's style of work hangs in some of the world’s top museums and galleries. But the art world is just one of the creative sectors having to rethink how they operate as many galleries temporarily close for business or operate by appointment due to the coronavirus.

"Generally speaking people don’t want to leave the house but they don’t want to stop enjoying art. They want to be able to see that new work is being created. I find it extremely important personally to think that creativity is still alive it’s still going,'' says Jasper Hope, the CEO of Proscenium Arts, a gallery based in the Emirate.

British art duo The Connor Brothers should have been unveiling their first exhibition in the Middle East in Dubai’s artistic quarter, Alserkal Avenue in Al Quoz, but rather than postpone it because of Covid-19 they decided to showcase it online. A first for them.

"So we’ve shown all over the world really apart from the Middle east. You find there’s a different kind of engagement with each place you go according to their culture and everybody views our works really differently wherever we go so it’s always quite exciting to see. It’s like seeing it through fresh eyes through everyone’s response. We are really excited to show and we’re a bit upset we can’t be there,'' said Mike Snelle, The Connor Brothers.

"Hopefully this situation is another negative but temporary chapter which will hopefully bring something positive and crazy out of it," said other half of the art duo, James Golding.

The art world, like the rest of us, is hoping for a return to normality soon. In the meantime, can digital exhibitions compare with physically visiting a gallery? Perhaps not, but maybe right now they can fill the void, says Jasper Hope: "I think it is the same in art as it would be in music. You want to be in the room when the show is happening and that’s equally true here but if you can’t be you have to settle for something else and what’s happening here is we are using technology, we’re bringing pieces online not to lose the feeling, which will be back, you know this is just a temporary situation."