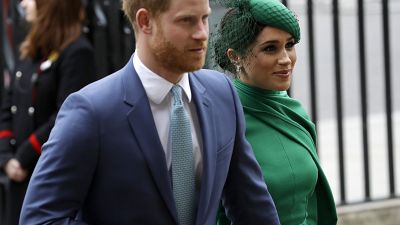 The Duke and Duchess of Sussex have announced that they will now refuse to engage with the British tabloid press accusing them of publishing "distorted, false, or invasive" stories.

The couple wrote to the editors of Britain's Daily Mail, The Sun, Mirror and Express on Sunday to outline "a new media relations policy" now that they're no longer senior members of the royal family.

"The Duke and Duchess of Sussex will not be engaging with your outlet. There will be no corroboration and zero engagement," the letter to the editors read.

"It is gravely concerning that an influential slice of the media, over many years, has sought to insulate themselves from taking accountability for what they print — even when they know it to be distorted, false, or invasive beyond reason," it went on.

The Duke and Duchess added that they've have seen friends and complete strangers "have their lives pulled apart for no good reason, other than the fact that salacious gossip boosts advertising revenue" and that they will on longer "offer themselves up as a currency for an economy of clickbait and distortion".

They refuted any argument that their new policy will reduce their own accountability, saying that "it is not about avoiding criticism".

"Media have every right to report on and indeed have an opinion of The Duke and Duchess of Sussex, good or bad. But it can't be based on lie," the letter went on.

The couple, who now resides in Los Angeles, in the US, stressed that they will continue to engage with news organisations from around the world as well as "up-and-coming journalists".

It is not the first time Harry and Meghan have spared with the press. They took legal action against the Daily Mail in October 2019, accusing the paper of a "ruthless campaign" against the Duchess which involved the publication of private letters and what they described as "continual misrepresentations".

The Duke and Duchess of Sussex undertook their last official engagement as senior members of the royal family at the end of March.

Their decision to step back from their roles, announced in early January, seemingly took the rest of the British royal family by surprise and plunged the institution into uncertainty and soul-searching.