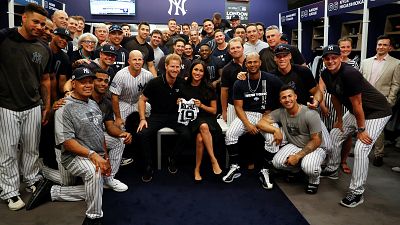 Prince Harry, Duke of Sussex and Meghan, Duchess of Sussex pose for a photo with the New York Yankees before their game against the Boston Red Sox at London Stadium on June 29, 2019 in London, England.   -   Copyright  WPA Pool Getty Images
By Kalhan Rosenblatt  with NBC News Entertainment  •  Updated: 01/07/2019

The Duke and Duchess of Sussex met with members of the New York Yankees and Boston Red Sox during a baseball game held in London on Saturday.

The teams played in England's London Stadium on Saturday and were scheduled to play another game on Sunday as part of the London Series, which marks the first time that Major League Baseball teams had "regular season games played in Europe," according to a MLB press release.

On Saturday, Prince Harry and the former Meghan Markle met members of the two teams, as shown in pictures shared by the Invictus Games Foundation, a partner of the London Series. Prince Harry is patron to the foundation, which sponsors sports for wounded, injured or ill armed services personnel and veterans to take part.

It appears the prince and the Duchess of Sussex were gifted a baby's onesie from each of the rival teams for their son Archie, born onMay 6.