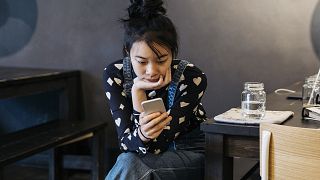 A bizarre finding by researchers that sounds like something out of a science fiction plot — people growing horn-like structures on their skulls due to smartphone use — may, in fact, have a simple explanation: bone spurs.

The study, which was published last year in the journal Scientific Reports, indeed found bony growths on the bases on skulls of around 400 adults, ages 18 to 86. And younger people were found to have larger growths.

The researchers referred to these growths as a "prominent exostosis ... emanating from the external occipital protuberance." Or, in layman's terms, a bone spur, located at the base of the skull.

Bone spurs — small bony growths that can form on the edges of bones — occur when inflammation damages the cartilage that cushions joints, and the body tries to repair the damage by growing more bone. They often form from repetitive motions. One type of repetitive motion is tilting the head forward, perhaps to look at a smartphone.

The study, by Dr. David Shahar and Mark Sayers at the University of the Sunshine Coast in Australia, flew under the radar when it was published at the end of last year, but a BBC article last week on how modern life is transforming the human skeleton brought to light how the human body is changing with technology use.

The bone spurs identified in the study ranged in size from 10 to 31 millimetres. Some were so big that they could be felt as a lump on the back of the head.

The development of these growths may be attributed to and explained by, extensive screen-time, the researchers said. Sustained "forward head flexion," or bending the head down, and poor posture could be the reasons for these physiological changes, they hypothesized.

The findings highlight how little is known about the extensive use of these technologies. "Although the 'tablet revolution' is fully and effectively entrenched in our daily activities, we must be reminded that these devices are only a decade old and it may be that related symptomatic disorders are only now emerging," the authors wrote.

Most bone spurs don't cause pain and require no treatment, but they can become a problem if they reach a certain size.

And that may already be the case. A small 2011 study on university staff and students in Canada found 68% of participants reported neck pain.

"You're at the airport or school and everyone is hunched over. It would be fine if it was 15 seconds here or 15 seconds there, but when it's over hours you're concerned that this habitual behaviour can result in a real curved deformity, especially in kids but really all adults," Geier, who was not involved with the research, said.

The findings are evidence of how extended use of technology such as smartphones and tablets in everyday life has led to physical changes. But this isn't the first time that technology has been identified as the culprit for health issues in young people.

The number of cases of ailments such as "text neck", "texting thumb", Dowager's hump and neck, shoulder and lower back pain resulting from cellphone and computer use in young people has been increasing since the early 2000s.

How to avoid the tech bumps

But that doesn't mean these issues are unavoidable. "If people are worried that this is starting to happen, you can work with a physical therapist to learn exercises to strengthen the muscles that help with their posture," Geier told NBC News.

The study "isn't going to convince people not to use their phone. But small changes like putting pillows under our laptops and holding the phone or tablet higher up and away from our laps can promote better posture," Geier added.

"We need to get up and moving. We have got to get people more active for a number of reasons. The sedentary aspect of this is huge and these devices are killing us in that respect."