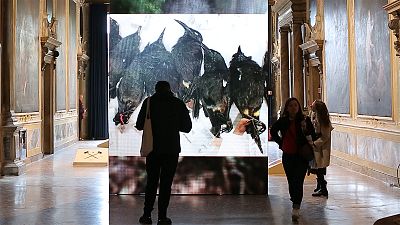 Canals, gondolas, St. Mark's Square, the Bridge of Sighs... these are likely all things that come to mind when you think of Venice.

But, beyond the clichés, Venice is a city of art. It combines tradition and modernity, and connects the past with the future.

There is perhaps no better example of this than the Venice Art Biennale, the oldest biennial arts exhibition in the world.

It first began in 1895, but, even today, it still remains a major event in the art field.

And now, it has opened its doors for the 58th time, giving visitors the chance to discover works from all around the world.

This year's theme is 'May You Live In Interesting Times', giving artists and visitors an opportunity to explore current political issues through art.

Ralph Rugoff, the exhibition's curator, told Euronews: "I think this is very much a show about the present. It's about the times we live in and those times grew out of history they didn’t appear out of nothing and they may be heading towards a possible future we don't know. But this is really an exhibition about how artists respond to the times we live in."

One of the most controversial pieces on display is "The Barca Nostra" by Swiss-Icelandic artist Christoph Büchel.

The display features the wreck of a boat in which more than 600 people died, when it sank off the coast of Libya in 2015.

But, Ralph Rugoff claims that the piece is not actually a work of art.

"It's not art, but it's an artist who initiated this presentation. It's an artist who's taking something real from the world, something associated with tragic death and is putting in the context of an artworld to ask questions," he said.

Polish artist Roman Stanczak asked some questions of his own, with his work which features a plane cabin.

He said the artwork refers to the crash that killed former Polish President Lech Kaczyńsk.

and all of this at the top of technological development. We always come back to our primitive instincts," he said.

Keeping with the theme of connecting the past, present and future, Korean artist Siren Eun Young Tung exhibits work that reflects on the relationship between tradition and modernity, from a woman's point of view.

Among the events that are hosted at the Biennale is the Future Generation Art Prize, one of the most prestigious awards.

Twenty-one artists from around the world were brought together, and Lithuanian artist Emilija Skarnulyte was chosen as the winner.

Her work includes the 'T 1/2' video', which was filmed in a nuclear plant considered to be the twin sister of Chernobyl.

"I'm interested in future archeology, like looking to all these human-left scars, and signs in earth both through scientific progress and kind of cold war mythologies."