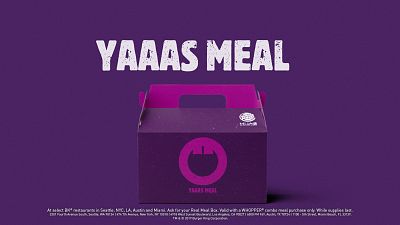 Happy Meals have been synonymous with fast food for decades, ever since McDonald's first rolled out its kid-friendly concept in 1979.

But let's face it, it's not easy to be happy all of the time.

Now, Burger King has come up with a new meal box line that honors a full range of human emotions — from totally excited to super sad.

And while the brightly colored boxes might seem like just another fast food jab at Burger King's largest competitor McDonald's, their release is tied to an important cause.

Burger King partnered with the non-profit organization Mental Health America to increase visibility about issues surrounding mental health during May, which is Mental Health Awareness Month.

"A natural extension of encouraging people to 'be their way' is encouraging them to 'feel their way.' With the pervasive nature of social media, there is so much pressure to appear happy and perfect," the chain said in the press release. "With Real Meals, the Burger King brand celebrates being yourself and feeling however you want to feel." A representative for the fast-food chain confirmed to TODAY Foodthat a donation was made to Mental Health America but would not specify how much or whether a specific issue was targeted.

Customers can order any box they choose but what, exactly, is in a real meal?

Every Real Meal is basically some type of Whopper combo meal (which the guest chooses) and, unlike Happy Meals, these are not being targeted at young kids. Unfortunately, none of the Real Meals come with a toy.

Though Burger King is trying to make a statement that not everyone is happy (at least not all the time), many social media users are pretty happy about the chain's decision to bring attention to an important issue.

Burger King has been making an effort in recent years to tap into real social issues, taking on topics ranging from the pink taxto net neutrality.