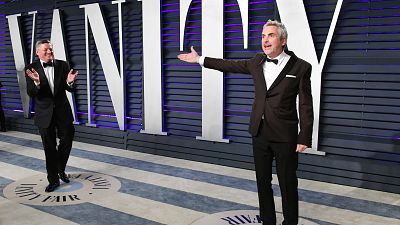 Almost exactly a year ago, Steven Spielberg made it clear how he felt about Netflix muscling its way into Hollywood's most illustrious event, the Academy Awards.

The streaming giant's films are essentially TV movies, he said during a promotional tour for "Ready Player One," and the best of them "deserve an Emmy, not an Oscar.

"Netflix, evidently, did not get the message. The company spent tens of millions of dollars on an Oscar campaign for Alfonso Cuarón's sweeping drama "Roma," and it finished the 91st Academy Awards with three major wins. And there are already signs Netflix will mount a similarly aggressive awards push this fall for "The Irishman," Martin Scorsese's big-budget mob epic.

Spielberg, who has said "the greatest contributions we can make as filmmakers is to give audiences the motion picture theatrical experience," is not backing down. He is reportedly campaigning for film academy rules changes that could block streaming services from competing at the Oscars unless they give their movies a full-fledged run in theaters. In the eyes of many studio executives and multiplex owners, this is not some obscure bureaucratic squabble but a high-stakes fight for the future of the medium.

But the battle is not as clear cut as Netflix vs. Hollywood.

The tension and anxiety in the film industry blew out into the open in recent days, and some prominent industry figures came to Netflix's defense. Netflix, for its part, appeared to fire back at Spielberg but has also reportedly considered appeasing some of its more vocal critics with more robust theatrical engagements for upcoming prestige projects.

The debate has been going on since at least 2006, when Steven Soderbergh became the first Oscar-winning director to release a movie in theaters and on television over the same weekend with "Bubble," a low-budget murder mystery. The move shook Hollywood, and the Los Angeles Times asked the million-dollar question: "Is the great American tradition of going out to the movies on its way out?"

The film industry, more than a decade later, is still wrestling with that question. America's theatrical box office was buoyed last year by a string of massive hits, including "Black Panther" and "Avengers: Infinity War," and moviegoers have shown they will still turn out en masse for franchises like "Star Wars."

But the long-term future of theatrical exhibition is far less clear. Netflix gives its more than 150 million global subscribers good enough reason to stay on the couch instead of heading out to the local theater, threatening what some top-tier directors consider a cherished American ritual.

Spielberg and Christopher Nolan, the respected director behind the "Dark Knight" trilogy, are part of a cohort of filmmakers who have championed old-fashioned theatrical moviegoing — widescreen projection, premium sound, large crowds gathered in reverential silence — amid the rise of digital alternatives and sophisticated televisions.

In a 2014 op-ed in the Wall Street Journal, Nolan wrote that big-screen exhibition is "to the movie business what live concerts are to the music business — and no one goes to a concert to be played an MP3 on a bare stage." And as Spielberg put it at an audio awards show last month: "There's nothing like going to a big dark theater with people you've never met before, and having the experience wash over you."Spielberg, however, has been on the losing end of similar fights before. He once needed to be cajoled into releasing "E.T. The Extra Terrestrial" on VHS.

Why is everybody so mad?

Netflix angered Hollywood traditionalists by putting Cuarón's "Roma" in select theaters for only three weeks before making it available on its digital platform, flouting the usual 90-day "window" that separates a movie's run in theaters and its arrival in your living room.

The service's detractors, including the National Association of Theater Owners, dismissed the brief theatrical release as a perfunctory bid to satisfy Oscar eligibility rules, and some major theater chains refused to screen it.

Netflix, for its part, has suggested that its convention-defying approach to distribution is supported by the habits and needs of contemporary audiences."In a world where consumer choice is driving everything — how we shop, how we order groceries, how we are entertained — we're trying to get to a place where consumers have theatrical viewing as a choice," Netflix film chief Scott Stuber told The New York Times in December."But we also think it is critical that, if you don't have the means or access or the time to go to a theater, you are still able to see movies without a long wait," Stuber added.

The price of doing business

Netflix, at its core, is a technology company that runs on algorithms and reams of user data, giving the firm virtually unprecedented insight into the preferences of the modern moviegoer.

But it has also embraced the role of a studio, working to poach and please A-list filmmaking talent, including Cuarón, "The Shape of Water" auteur Guillermo del Toro, action king Michael Bay, indie darling Noah Baumbach and television brand names Ryan Murphy and Shonda Rhimes. (Spielberg, for the record, has also collaborated with Netflix, co-producing the WWII documentary series "Five Came Back.")

Scorsese could give the company an especially large feather in its cap with "The Irishman," a drama about the killing of Jimmy Hoffa that stars Robert De Niro, Al Pacino, Joe Pesci and Harvey Keitel. Netflix scooped it up after old-school player Paramount Pictures balked at its hefty budget.

Scorsese wants a wide theatrical release for the film, and Netflix has been "working to get him one," according to The Hollywood Reporter, citing unnamed sources. A brief teaser trailer that aired during the Oscars contained what could be a clue, saying the film would drop "in theaters next fall."

The debate heats up

The reports on what Spielberg plans to do at an upcoming meeting of the Academy of Motion Picture Arts and Science's board of governments stoked intense debate online, drawing other heavy-hitting directors into the spat.

Ava DuVernay ("Selma," "A Wrinkle in Time") tweeted at the film academy's account Friday: "I hope if this is true, that you'll have filmmakers in the room or read statements from directors like me who feel differently."Franklin Leonard, an influential industry voice who runs an annual survey of the best unproduced scripts called The BlackList, tweeted over the weekend that Netflix has been a boon for diversity and representation. He pointed out that the company's first four high-profile Oscar campaigns were made by and about people of color: "Beasts of No Nation," DuVernay's documentary "The 13th," "Mudbound" and "Roma.""It's possible that Steven Spielberg doesn't know how difficult it is to get movies made in the legacy system as a woman or a person of color," Leonard tweeted Saturday.

But other industry luminaries seemed to question the importance of theatrical distribution altogether. Paul Schrader, who wrote the screenplays for Scorsese's "Taxi Driver" and "The Last Temptation of Christ" and earned an Oscar nomination this year for his religious drama "First Reformed," suggested that movie theaters may not be worth saving.

"The notion of squeezing 200 people into a dark unventilated space to see a flickering image was created by exhibition economics [and] not any notion of the 'theatrical experience,'" Schrader wrote in a Facebook post Saturday.

"Netflix allows many financially marginal films to have a platform and that's a good thing."

Soderbergh, the filmmaker whose unorthodox release strategy for "Bubble" helped kickstart this debate 13 years ago, is also skeptical that theatrical exhibition is the be-all and end-all. "I'm pretty agnostic about the venue," the iconoclastic director, who has lately taken to shooting movies on iPhones, said in a 2017 interview.

The top streaming services are clearly betting that average moviegoers are agnostic, too. Soderbergh's next film, a docudrama about the Panama Papers scandal called "The Laundromat," arrives on Netflix this fall.