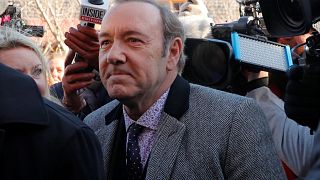 Kevin Spacey arrived at a Massachusetts courthouse Monday morning for his arraignment on sexual assault charges.

The charges stem from an allegation that first came to light in November 2017 when the accuser's mother, former Boston TV news anchor.Heather Unruh, said Spacey groped her then 18-year-old son during a random meeting in July 2016 at the Club Car Restaurant in Nantucket. Unruh's son has said he won't be in court on Monday.

"By reporting the sexual assault, my client is a determined and encouraging voice for those victims not yet ready to report being sexually assaulted," the accuser's lawyer, Mitchell Garabedian, said in a statement on Monday before the hearing. "My client is leading by example."

Spacey faces up to five years behind bars, if convicted of all charges. Spacey has generally kept a low-profile since several men have accused him of sexual misconduct — allegations he denied. Unruh made her accusations just five days after Netflix, makers of his hit show "House of Cards," cut ties with Spacey.

The actor tweeted a video on Christmas Eve looking into the camera and speaking in a southern accent that appeared to mimic his "Cards" character, President Frank Underwood. He seemed to reference his "Cards" termination.

"Despite all the poppycock, the animosity, the headlines, the impeachment without a trial. Despite everything," said Spacey, wearing a Santa Claus apron and standing in a kitchen. "Despite even my own death, I feel surprisingly good and my confidence grows each day that soon enough you will know the full truth."