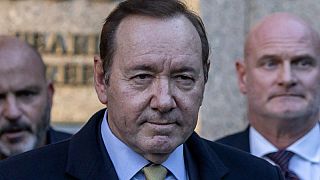 An Italian film museum has revealed plans to give US actor Kevin Spacey a lifetime achievement award.

The National Museum of Cinema in the northern city of Turin says it wants to honour the 63-year-old's contribution to the growth of cinema. Spacey will also teach a masterclass.

According to Enzo Ghigo, president of the National Museum, the ceremony will take place on Jan. 16, 2023. There will also be a screening of a Spacey film, though Ghigo didn’t say which.

“We are honored that such a prestigious guest as Kevin Spacey chose Turin and our museum for this long-awaited return to an event with an audience,” he said.

It comes two weeks after a New York jury cleared Spacey of wrongdoing in a sexual abuse lawsuit brought byAnthony Rapp. He claimed to have been assaulted when both were relatively unknown Broadway actors in 1986 and Rapp was 14 years old.

Rapp’s #MeToo-era allegations, and those of others, derailed Spacey's soaring career. The two-time Academy Award winning actor lost his starring role on the Netflix series “House of Cards” and saw other opportunities disappear.

Rapp is a regular on TV’s “Star Trek: Discovery” and was part of the original Broadway cast of “Rent.”

Spacey previously faced charges in Massachusetts that he groped a man at a bar - allegations that were later dropped by prosecutors. Three months ago, he pleaded not guilty in London to charges he sexually assaulted three men between 2004 and 2015 when he was the artistic director at London's Old Vic theatre.

A judge in Los Angeles this summer approved an arbitrator’s decision to order Spacey to pay €30 million to the makers of “House of Cards” for violating his contract by sexually harassing crew members.

Spacey filmed his most recent movie, director Franco Nero's “The Man Who Drew God,” in Turin.

“Now, among all of the cities of the world, he chose Turin for a master class. He couldn’t give us a better present than this,” Domenico De Gaetano, the director of the National Museum of Cinema, was quoted as saying.