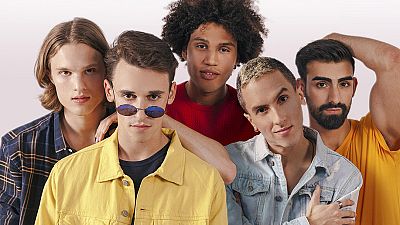 When Britain voted to leave the European Union in June 2016, Julia Veldman was homesick and living in the United States.

But she wasn’t missing cheese and liquorice as some Dutch people would, instead she was longing for the concept of Europe.

Veldman, 30, describes Europe as a place trying to make the lives of all its citizens better and said she was heartbroken when Brits voted to leave.

“The last time I felt that desperate and hopeless was when Take That broke up," she told Euronews.

"I thought to myself, why not use the best thing Britain ever gave us — the boy band — to speak to people on such a serious issue?”

She decided to form the Breunion Boys and they released their debut since this week pleading for Britain to come back [to the EU].

“As the band’s creator it took a lot of time and effort to find the right boys for the band,” Veldman told Euronews.

“I had to find boys who were talented and beautiful but also believed in this cause.”

Breunion Boys are composed of five men between the ages of 21 and 25, three of them Dutch university students.

One member, Seyed, 23, is a refugee from Afghanistan who credits the European Union for still being alive.

“To me, the EU means living in freedom, freedom to express yourself, to become the best version of yourself. Everyone deserves the chances that I have got here,” said Seyed.

Breunion Boys' creator told Euronews they plan to tour the UK soon to start a conversation with both Leavers and Remainers about the "special relationship the European Union provides".

“Of course it is tongue in cheek and a fun video, but this is a very serious message we are trying to send,” Veldman said.

“Everyone involved in this project has done this for free and wants to share with all of Europe what we truly believe in.”

"Britain Come Back," was written for the Breunion Boys by Flavia Faas, a Dutch song composer. The track doesn't gloss over Britain's bumpy relationship with the EU and blames Brussels for failing to fully appreciate its EU partner. It also criticises the Leave campaign saying voters "didn't have a fair choice" and "the lies, they let all of us down".