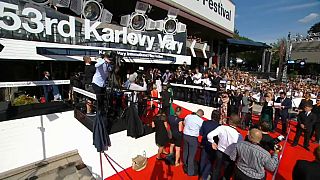 The 53rd Karlovy Vary International Film Festival kicked off with a lavish red carpet gala. The festival is one of the oldest in the world and one of Central and Eastern Europe’s main film events. Stars attending the festival include the Hollywood actor Tim Robbins who received an outstanding contribution to world cinema award at the opening ceremony. Over 9 days, more than 200 movies will be screened at the festival.