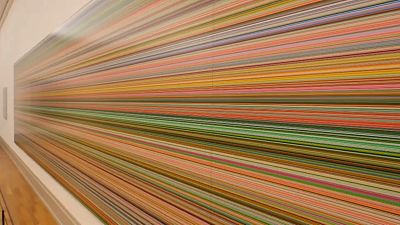 For admirers of the German artist Gerhard Richter his paintings are as distinctive as they are impressive and they can now be seen in a new exhibition in Potsdam near Berlin.

Richter is one of the most influential abstract artists in the world and this latest exhibition traces the development of his works over the years.

The 86 year-old artist is still very active, as shown in the collection of 94 works in the Museum Barberini in Potsdam.

Originally inspired by Jackson Pollock, Richter has developed his own unique style. But despite being known as an abstract artist, it is not a term he is happy with.

"The term 'abstraction' is not totally satisfying," he says.

"It makes it sound like you are abstracting something. And I don't think that is the case with these paintings, or with abstract paintings in general."

Paintings by Richter have been known to reach prices of many millions of euros. He is also seen as a political artist, having addressed some of the issues he faced as a young man growing up in East Germany.

As well as working on canvas, Richter produces sculptures and installations.