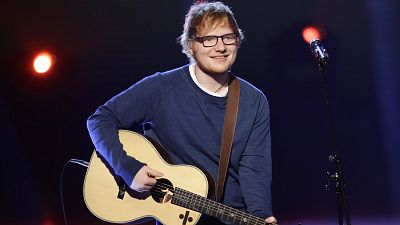 English singer and songwriter Ed Sheeran was sued on Thursday for at least $100 million for allegedly copying large parts of Marvin Gaye's classic "Let's Get It On" for his smash hit "Thinking Out Loud."

The lawsuit was filed by a company owned by David Pullman, an investment banker who in 1997 arranged the pioneering $55 million sale of "Bowie Bonds," which made David Bowie the first musician to sell bonds backed by royalties from his catalog.

According to the complaint filed in Manhattan federal court, "Thinking Out Loud," which peaked at No. 2 on the Billboard Hot 100 in February 2015, copies the "melody, rhythms, harmonies, drums, bass line, backing chorus, tempo, syncopation and looping" of "Let's Get It On," which hit No. 1 in September 1973.

Other defendants include Sony/ATV Music Publishing and the Atlantic record label.

Representatives for Sheeran and Atlantic did not immediately respond to requests for comment. Sony/ATV spokesman Paul Williams declined to comment.

Those defendants have denied any infringement in a related lawsuit filed by heirs of the late producer Ed Townsend, who co-wrote "Let's Get It On" with Gaye. Pullman's company, Structured Asset Sales LLC, owns one-third of Townsend's estate.

Sheeran, 27, has faced infringement claims over other songs, including "Photograph" and "Shape of You."

On March 21, a federal appeals court upheld a $5.3 million judgment for Gaye's family against Robin Thicke and Pharrell Williams for copying from another of his songs, 1977's "Got to Give It Up," for their 2013 smash "Blurred Lines."

Pullman, 56, invests in music, entertainment and other intellectual property assets, and securitizes some of them.

In an interview, Pullman said people interviewed for news coverage about "Blurred Lines" noted similarities between "Let's Get It On" and "Thinking Out Loud."

He said three musicologists compared the songs independently and found them "substantially or strikingly similar," a legal standard used to determine infringement.

"We wanted to do everything right in terms of the detail," he said.

While many cases are settled or dismissed, Pullman said artists should not wait until after their songs become hits to get necessary permissions.