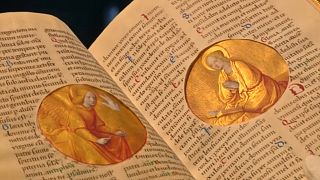 A businessman accused of fraud claims he has been vindicated after a medieval manuscript was sold for more than €4 million at an auction house in Paris on Saturday.

Former owner Gerard Lheritier is facing prosecution for frauding investors with a company that acquired 130,000 artworks and literary treasures - but he says the high prices being obtained in the bankruptcy sale show that his scheme was genuine.