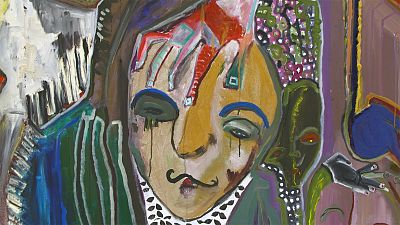 The Saatchi Gallery in London has handpicked a selection of work by seventeen contemporary artists relatively unknown to the general public and is featuring it at a major exhibition.

“We called it Known Unknowns because we were bringing together quite an eclectic group of artists from the collection. We felt that they needed further attention and a wider audience," explains Philippa Adams, Senior Director at the Saatchi gallery.

"Some of them are very well respected within the art world but others are very new, they just finished college,” Adams added.

For young painter Mona Osman the exhibition could be a life-changing opportunity, not so long ago she was working as a waitress in a restaurant with a small gallery.

“In 2016, they had some free space in the gallery so they asked me if I like to put up my work and I said ‘of course I’d love to’. One day, Sir Saatchi came down to the exhibition and he purchased 6 of my work at the time,” Osman recalls.

Her oil paintings, depicting the struggle with self-identity and belonging through heavy brushstrokes and intense colours, impressed the art collector.

"I’m very interested by what I call the backstage of the personality, the part that we don’t like to put on display," says Osman in front of one her paintings titled "I’m only doing this because I love you".

The exhibition features a diverse range of art forms including sculptures, videos and collages. What brings these artists together is their reputation for breaking new grounds.

Rannva Kunoy is one of the other artists featured at the exhibition:

“These paintings came to me after sort of eight years of experimentation in the studio. If you look at the surface of the work it’s incredibly thin, there is no texture, so basically these works are trying to push the immateriality, the reality of the painting to the most extreme as far as you can go," she explains in front of her paintings, deep blue canvasses with abstract markings.

Kunoy uses a special type of paint to convey her message.

"These are crystal pigments so they shine light in and out of the surface. There is a sense of the movement in them. Because as you walk from one side to the next, the colour changes. It’s almost like a lamp. They are a light generator,” she says.

Known Unknowns is on at the Saatchi Gallery until August the 12th.