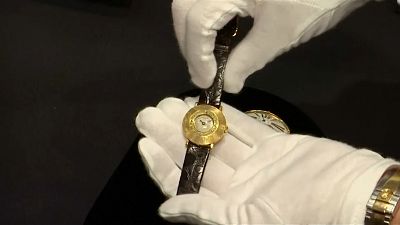 Fans of the US comedian Jerry Lewis will be able to get their hands on some of the late actor's most cherished objects at an auction next month in Las Vegas.

Whether it's his inconic tweed suit from his 1963 film the Nutty Professor or items from his watch and gun collections, the auction's organisers expect some of the over 400 items up for grabs to go for several thousand dollars.

Lewis' collection includes a gold watch given to him by his longtime on-screen partner Dean Martin with the inscription "Jerry My Buddy and Pal, I love you, Dino" on the back.

"His wife tells me that he used to love and just sit and wind the watches and, you know, clean them and he just really - watches were sort of his passion," said Martin Nolan, executive director of Julien's Auction who will be hosting the auction on June 22nd.

World's largest known freshwater pearl to go under the hammer