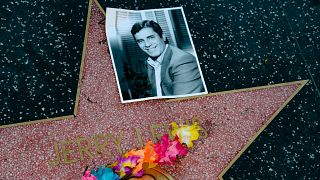 Fans of comic legend Jerry Lewis have been paying their tributes at his star on the Hollywood Walk of Fame in Los Angeles.

The 91-year-old entertainer died of natural causes at his home in Las Vegas on Sunday morning with his family by his side.

Lewis rose to fame as the goofy foil to suave partner Dean Martin and starred in more than 45 films in a career spanning five decades.

He was also a tireless fundraiser for children with muscular dystrophy.

He once summed up his career by saying “I’ve had great success being a total idiot” and said the key was maintaining a certain child-like quality.