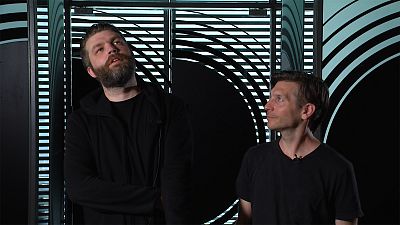 With less than a year to go until Brexit, British indie rock band Editors remind us of the day they heard the referendum outcome.

For lead guitarist Justin Lockey, it was a 'dark day' in the UK.

"Brexit was a very dark day when that happened because, as liberal types that we are,  especially me and Ed, you have that false hope that everyone is going to do the right thing.

"We woke up at Glastonbury that morning, when that vote happened and it was quite distressing... You were really distressed, Ed."

"Yes! It affected me," explained Ed Lay, drummer and founder of 'Editors'.

"I read a interview with Jurgen Klopp this week and he was talking about how he feels that people seemed to have voted us out of something that obviously wasn't perfect -- when it was created, it wasn't perfect -- but it gave us all a sense of unity.

"And if anybody tries to just be exclusive, stay on their own and work on their own without the help and guidance of others, emotionally and politically, you are going to make a mess of it.

"I don't think we're living in a peaceful time if we're disconnected from the rest of the world. At this time, with everything else that is going on, with all the conflicts, it just seems to make no sense at all to cut our ties with our best friends.

"To me, it's utterly insane and it makes me very upset for the future of our country."

Justin Lockey summed up the pair's feelings on Britain's vote to leave the European Union.

"It feels like we have done something of which -  instead of growing culturally, scientifically, politically -  we've done something that essentially is just going to allow the next generation to spend time that they could have used doing something creatively and useful, trying to undo it."