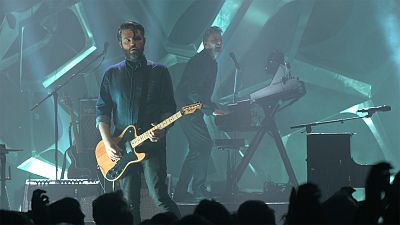 "Violence" is the title song of the new album by UK indie favourites 'Editors'.

They are promoting it with a tour and Euronews caught up with them at the 'Transbordeur' music venue in Lyon, France.

"Violence", the band's sixth studio album, reflects the times we live in.

"I never really see musicians as politicians but we have our own thoughts on things," lead guitarist Justin Lockey told our reporter, Francisco Marques.

"The state of the world as it is now with the rise of the right, populism on the rise in Austria and America... the death of the free press in Hungary. I think our songs fit into where we are at the moment."

The band also have serious issues with Britain, over bombings and Brexit.

"We're not quite at Hungary levels of suppression. I don't think we ever will be. I don't think it is the kind of country that would take that," said Lockey.

"But, saying that," he added, "it's the same country that bombed Syria without any authorisation from parliament and is leading the country into its worst decision in generations."

Lockey is the guitarist behind the riff that gives power to 'the song 'Hallelujah (So Low)'.

Editors frontman Tom Smith wrote the lyrics after a visit, with Oxfam, to a Syrian refugee camp in Greece. It resonates with the fans.

"Tom had certain feelings about his trip and wrote some lyrics to go along, reflecting on those feelings," explained Editors drummer and founder Ed Lay.

"And something quite magical happened when Justin came up with this huge guitar riff. It doesn't instantly relate to refugee camps but we capture the moment in that room and that's the way the best songs come out."

'Darkness at the Door' is the third single from the album.

On tour, the new material has gone down well, even the latest more electronic songs.

"The new stuff, I think, is sounding mega," said Lay.

"It feels that people are really responding to it.

"Bringing Blanck Mass in was something that we have never done before. He's a really heavy electronic producer and something that we were listening to and thought could work very well with our brand of music. Luckily, he was up for it and we created some pretty decent results."

Pressures of the music industry

The Euronews-Editors chat came just a few days after the death of young Swedish DJ and producer Avicii, which has revived the debate about the pressure faced by artists in the music industry.

"The temptation to alleviate that pressure by taking drink or drugs or doing things that are not necessarily the best for you, is always there, of course."

"It is not suprising when you hear of musicians passing away young," Lockey added.

After a first leg of European shows, Editors have taken 'Violence' on tour to the US.

But they'll be back in Europe in time for the summer festival season.

The band's concerts then include the BST Festival in London's Hyde Park on Saturday 7th July when they will be among the special guests of their musical ancestors, 'The Cure,' celebrating their 40th anniversary.