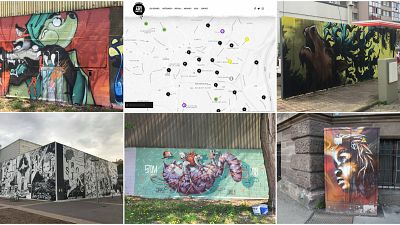 By clicking on different icons scattered across a map of the French city, users can see the locations of around 200 stickers, tags, stencils, and frescos, which is a type of mural painting, among other street art.

If a user clicks on an icon they can find a picture of the art, the creator and some information about the work.

At first, photographs for the website were only taken by professionals but organisers have now opened it up for the public to send their images.

"Some of the works are attributed to real artists that have their sites and studios, others are anonymous," Julien Lafarge, director of NL Contest — an annual festival that showcases new urban sports and practices that use urban space — who oversees the online project told Euronews.

A section of the website called "conteneur" (container) deals only with recycling bins that sport works of art.

One of the difficulties the site faces is deciding which works should be published and which are cases of vandalism.

"Street art is by definition an unregulated area, with the artist deciding what and where to draw. We select the works that may be perceived as art, and not vandalism," said Lafarge.

Local authorities in the French city set up the website in cooperation NL Contest with Strasbourg's city hall funding half of the site and festival organisers the other 50%.

Lafarge said to his knowledge there is no other city in Europe with an organised graffiti site like StreetArtMap's.

"The idea is to eventually expand the project to other cities," he said.