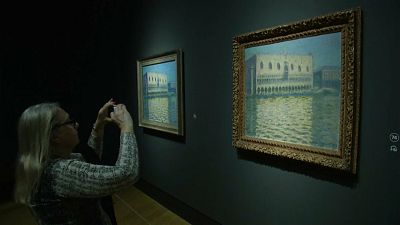 Monet's use of buildings was central to many of his compositions
By Mark Armstrong  •  Updated: 10/04/2018

French Impressionist painter Claude Monet is perhaps best known for his landscapes in his native France. Now, a new exhibition at London's National Gallery is exploring another of his favoured subjects - architecture. It aims to show how the artist used buildings in his compositions.

Richard Thomson, who is Guest Curator and Watson Gordon Professor of Fine Art at the University of Edinburgh, said buildings are central to many of Monet's works:

"Monet used buildings in his pictures for all sorts of different reasons, primarily pictorial. He could use the regular shape of architecture against the irregularity of nature. Sometimes he used buildings as screens on which the light played. On other occasions, architecture has an almost psychological effect. So, there's a great diversity and range to the way buildings were used in Monet's work."

One exhibit highlight is this collection of paintings from 1899-1901, when Monet was working in London.

Staying at the famous Savoy hotel, Monet captured London's skyline from his balcony on the sixth floor, gradually shifting his focus as the sun swept across the British capital.

"Now, London in those days, at the beginning of the 20th century, was heavily polluted, not just foggy, but very industrial and Monet enthused in his letters about the fogs, which were green and yellow and these constantly changing effects fascinated him, as they made the cityscape in front of him a kaleidoscope of different effects," explained Thomson.

The exhibition "'Monet & Architecture" shows 75 paintings representing different periods of his work, runs until the end of July at The National Gallery in London