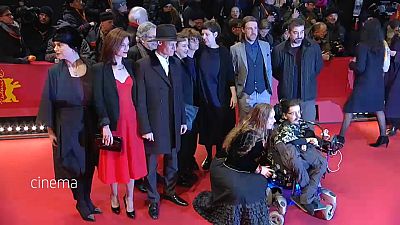 Glitz and glamour go hand in hand at most film festivals and, in those cases, Berlin is no different from the rest. But movies on offer in the German capital often prove to be slightly more challenging, regardless of whether they're in or out of competition.

More than 400 movies were screened with 19 competing for the Golden Bear award. German film director Tom Tykwer was the jury's president; here's our round-up of the highlights and major winners of this year's edition.

The Berlinale opened with Wes Anderson's stop-motion animation film "Isle of Dogs" and the red carpet rocked as the director was joined by one of its stars Bill Murray for a drumming display with a difference. Jeff Goldblum, Tilda Swinton and Bryan Cranston were amongst the other big Hollywood actors who turned out.

Fans also made the most of appearances by European stars like Robert Pattinson, Isabelle Huppert and the British musician Ed Sheeran.

Willelm Dafoe received a lifetime achievement award in recognition of his array of films and acting work.

Arguably, the surprise sensation of the week was the awarding of the Golden Bear for best film to Romanian director Adina Pintilie for "Touch Me Not"

In "Touch Me Not", she joins amateur and professional actors as they embark on a voyage of self-discovery to explore the limits of sexual experiences.

Describing the film Pintilie told euronews: "It's inviting the viewer to challenge his own perspective on intimacy, on beauty, on how people relate to each other and to embrace the otherness, the other which is different than you."

Frenchman Anthony Bajon picked up the best actor award for his lead role in The Prayer by Céderic Kahn. Bajon delivers a highly convincing, yet emotionally raw performance of a young man fighting to beat his drug addiction at a Catholic Alpine retreat.

"It's never easy to portray anger on-screen," Bajon explained to euronews. "It's something that has to come out on its own and what's more we did several takes, one after another and you have to maintain the same energy, keep it fresh each time - and that is what's complicated."

The best actress award went to Anna Brun for playing a elderly lesbian who's left to fend for herself after her partner is sent to jail in Las Herederas .

The Paraguayan movie by Marcelo Martinessi also the FIPRESCI (the international press critics) prize and a Silver Bear for best film that opens new perspectives.

Wes Anderson made history by collecting the Best Director gong for "Isle of Dogs". His long-time collaborator, Bill Murray, who voices one of the canines, accepted the award on Anderson’s behalf said

"I never thought that I would go to work as a dog and come home with a bear."

The Grand Jury price went to the film "Twarz" by Poland's Małgorzata Szumowska. Twarz follows a young man's transformation after a face transplant. He loses his identity and is rejected by a society that doesn't recognise him anymore.

'Daughter of Mine' draws in Berlinale crowds