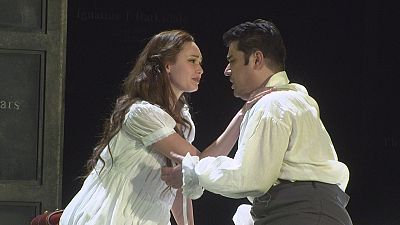 It is the most famous love story of all time: Romeo and Juliet. Now Charles Gounod's version of the Shakespearean tragedy --_Roméo et Juliette_-- has returned to the Gran Teatre del Liceu in Barcelona.

The Liceu last performed the opera 32 years ago. This production celebrates the 200th anniversary of the French Romantic composer's birth.

"All the young girls they want to be Juliette because they understand this image of this girl, " Garifullina says. "She is soft. She is fragile".

The aria Je veux vivre (I want to live), is an allegory, Garifullina adds. "It shows that she really wants to live this adult life, to be free, to do what she wants, just to celebrate".

"There is something really naïve in this aria," Pirgu says. "It's very beautiful to hear".

Magical duets, spinning waltzes and dramatic choruses combine to create an epic backdrop to this masterpiece.

"The musical idiom that Gounod uses ranges from the serious, to opera comique, to almost kind of chanson," says stage director Stephen Lawless. "Gounod also writes with a sense of very, for me, very French irony and elegance".

Co-produced with the Santa Fe Opera in the United States, Lawless' sets place the drama during the American Civil War.

"It’s 19th century music. So we made the decision to set it in the 19th century but we wanted to find a context for it," Lawless explains.

Gounod infuses the drama with ravishing melodies, all while focusing on the two lovers.

He ends by giving them a heart-wrenching final reunion in the tomb scene.

"Sometimes when I'm singing that scene, it's quite emotionally hard for me, especially when I'm saying 'the last baiser, the last kiss'," Pirgu says.

Roméo and Juliette's love triumphs as they die together in an immortal embrace.

"It's so strong; heartbreaking," says Garifullina. "She is adult enough to understand that the life is not only flowers, it can be really hard and difficult".

"In the real Shakespeare this last scene doesn't exist," Pirgu explains, "but in the Gounod story, it gave to this opera a big power".

Roméo et Juliette will be performed at the Gran Teatre del Liceu in Barcelona on 24 & 27 of February and 2 & 4 of March.