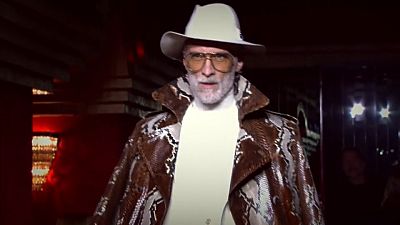 Milan fashion week continues with designers like Georgio Armani showcasing what will be 'in' this year.

Next up..... Canadian fashion bran DSQUARED2 TWO released a collection inspired by the Wild West.

Like other brands DSQUARED2 chose to mix men and women’s fashions in a week which was primarily men's week.

The designer twin brothers Dean and Dan Caten took to the catwalk at the end to thank the crowd.

Fedoras, silks, cashmere and mink combined with music by Tom Jones to make a look the designer described as 'sheer opulence'.

Keeping it traditional in Milan