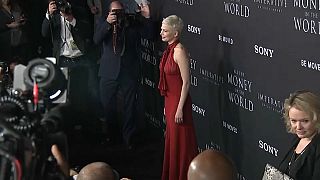 Michelle Williams at promotional event for "All the Money in the World"   -   Copyright  Associated Press TV
By Euronews  •  Updated: 15/01/2018

Hollywood actress Michelle Williams has thanked her co-star Mark Wahlberg for donating a re-shoot fee to Time's Up, the movement against sexual harrassment.

The newspaper USA Today reported that whilst Wahlberg was paid one and half million for re-shooting All the Money in the World, Williams got less than a thousand dollars.

Hollywood agency William Morris Endeavor, which represents both stars, said it would also donate $500,000 to Time's Up.

It had already pledged to give $1m earlier this month.

Scenes had to be re-shot after Kevin Spacey was removed from the completed film following the allegations of predatory sexual behaviour and replaced by Christopher Plummer.